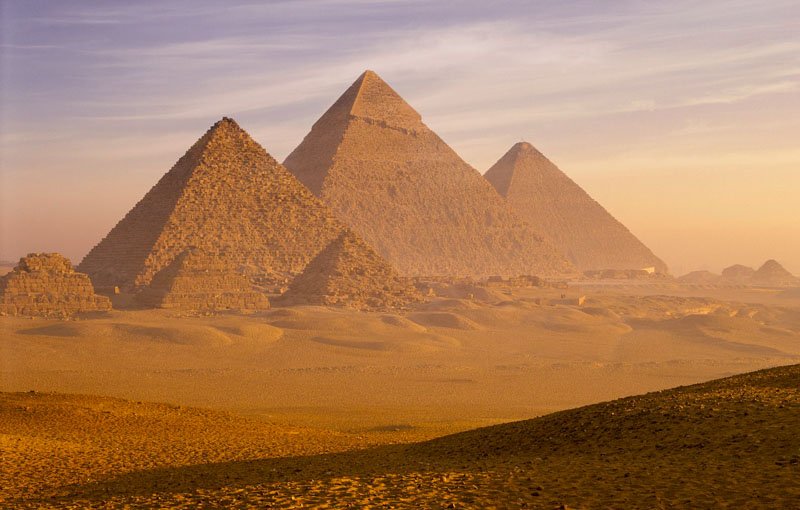 Hi Art explorers and welcome back!

In the previous post I promised we would have learned more about the most famous monuments in the Ancient Egyptian Art: the pyramids. Today we are going to discover the smallest of the three main Pyramids of Giza, but for sure not the less interesting: the Pyramid of Menkaure.

This pyramid have been built to serve as the tomb of the fourth dynasty Egyptian Pharaoh Menkaure (or Micerinos in Greek). It is interesting that this building represents the end of the period of the giant pyramids that started with Menkaure’s father Khafra and his grandfather Khufu.

The location in the Giza necropolis, few hundred yards southwest of its larger neighbours, is not casual: even if Menkaure’s pyramid is smaller he wanted to continue the family lineage.

This pyramid was probably finished when the Pharaoh died, but it was not unusual for a son or successor to complete a temple. Something more unusual is the fact that some parts of Menkaure’s pyramid were left in the rough. Like in a sort of rush. Actually for archeologists that is really valuable since incomplete projects help to understand the methods used to build pyramids and temples.

And here archeologists learned that the pyramid is made from limestone blocks quarried from the Giza plateau to reduce the transportation issues. The blocks, bigger at the bottom and smaller going higher, were placed in horizontal layers whose flatness was close to perfection.

The coating is a surprise since it was not made of one single material. The pyramid in fact was covered with a layer of fine and white limestone of great precision in the finish, except on the lower part, on the bottom 20 meters (the first 16 rows) which were in pink granite. Why? The reason was not just for a better appearance, but also because the pink granite is stronger and it was necessary to bear the weight of the upper “white layers”.

Nothing. I mean, we often think that inside the pyramids there are a lot of corridors, rooms, traps…but actually this is not true. Menkaure’s pyramid in particular is filled with granite blocks. And the burial chamber is around 12 meters (39 ft) below the pyramid, in the soil of the Giza plateau!

The entrance to the pyramid, hidden for a long time and discovered only in 1837, is four meters high towards the center of the north face and it opens onto a large corridor descending. This corridor 32m (104 ft) long leads to a decorated chamber.

This antechamber is 6m (19.6 ft) below the pyramid and, in a rectangular pit, was found a sarcophagus engraved with the name of Menkaure. However, radiocarbon dating on the bones stored inside it determined them to be less than 2,000 years old . That means it was put after, but how and when it is still a mystery! And also who is that body?

And we can try to imagine the surprise when the archeologists found that the real sarcophagus of Menkaure was protected here. A basalt, decorated sarcophagus that in 1838 it was decided that it would be extracted from the pyramid for display in the United Kingdom. Unfortunately, this sarcophagus now lies at the bottom of the Mediterranean Sea close to Cartagena, having sunk on October 13, 1838, with the ship Beatrice. It is still in the deep sea and we can just hope that one day we will be able to admire it.

Why the notch in the north face? Have fun with the interactive image below and discover what happened!

Probably it is hard for us to imagine what it means explore meter after meter such a sacred place without knowing what it is going to happen and what you can find. Even now we are still surprise, like for the fact that the pyramid just “cover” the burial chamber! So I am sure this post helped you to know more about Menkaure’s pyramid even if there are still some fascinating mysteries.

Our trip in the Ancient Egyptian Art stops here, but just for the moment because from the next post we are going to start a new topic. Stay curious!

The north face of the pyramid of Menkaure has a very large vertical notch, in the center of the face. This is a breakthrough made in the Arab era by the Mamluk Sultan Osman Bey who lived in the twelfth century. He was trying to find the entrance to the pyramid based on the knowledge gained on the other two pyramids of Giza.

The coating is not made of a single material, but 2. On the bottom part (first 16 rows) in pink granite and the upper part in white limestone.

The pink granite in fact is stronger and it was necessary to bear the weight.

The entrance was discovered only in 1837. 4 meters high, it opens onto a large corridor descending that after 32 meters opens on a decorated room