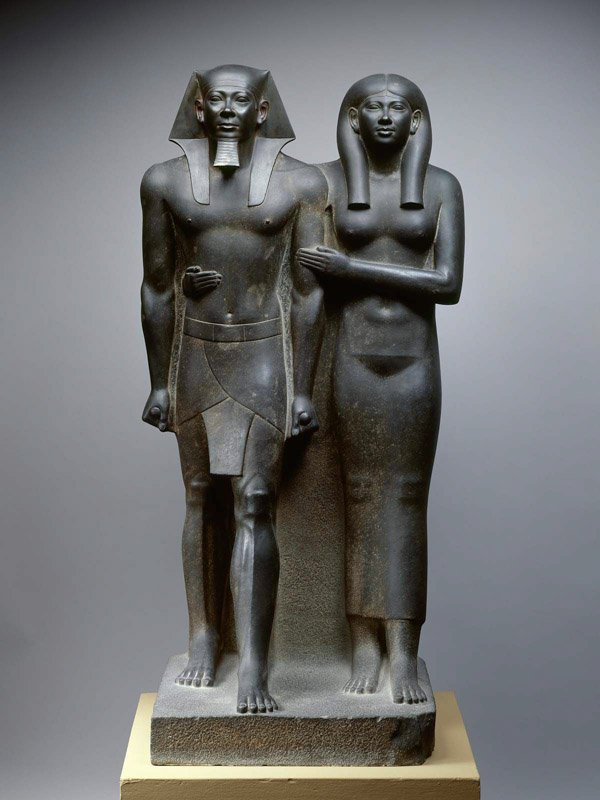 Hi everyone and welcome back to our journey in the Ancient Egyptian Art!

In the previous post we started to know more about sculpture discovering some “secrets” carved on the Palette of King Narmer. Today I want to talk about a statue, maybe “easier” to read, but a beautiful work of art with unique features: King Menkaure (or Mycerinus) and queen.

The nearly life-size statue depicts a simple scene: the pharaoh Menkaure and a queen standing side-by-side on a square base and supported by a shared black pillar. But beside the scene itself, we are impressed by the serene ethereal beauty and regality of the two figures amplified by the use of the dark stone polished to look smooth as silk!

But let’s make a step back to start our story.

On January 1910, excavators under the direction of George Reisner uncovered an astonishing collection of statuary in the Valley Temple connected to the Pyramid of Menkaure. The pyramids have always been the main excavation site (the Pyramid of Menkaure had been explored in the 1830s) basically ignoring the Valley Temple. That was a big luck since the Valley was full of finds and, among them, the statue of King Menkaure and queen dated back between 2490 – 2472 BC.

One of the reasons that make this statue unique is that Reisner found 4 complete triads, one incomplete and at least one other in a fragmentary condition. However, just one dyad.

All the statues are made from a smooth-grained stone called greywacke or schist. The triads show 3 figures: the king in the middle, the important goddess Hathor on one side and the personification of a nome (a personification of a geographic designation like a region or a county) on the other side. What surprises is that, while the triads follow a similar pattern in style and execution, the dyad King Menkaure – queen are breathtakingly singular.

First of all they both face to the front as convention, but Menkaure’s head is slightly unusually turned to his right. A theory is that the statue was originally positioned within a niche making it appear like if they were walking outside it. The head would have helped to suggest the movement.

The king is depicted with a broad-shouldered youthful body covered only with a traditional kilt, the pharaonic headdress nemes on his head and an a fake royal beard.

The king’s arms go straight along his body and he is holding the ritual cloth rolls in his hands amplifying the idea of a strong-statuary young man. The static position is broken by the stride forward with their left feet.

“Their” since both are in the same position. Now for us that could seem not a big deal, but if this action was entirely expected for the king, it is unusual for the female that were mostly depicted with parallel feet.

But the surprises are not finished 😉

The Queen and… son?

The queen, sensuously modeled with a proportioned body emphasized by a clinging dress, stands at nearly equal height with the king and she is holding him in a protective gesture. The reason is that probably we are looking at the king’s queen-mother rather than one of Mekaura’s wives.

Unfortunately who is the queen is still a mystery since the base of the statue, which is usually inscribed with the names and titles of the subject represented, was left unfinished. In fact, it never received the final polish of most of the rest of the statue.

We are sure about Mekaure’s identity because he resembles other statues from the same findspot bearing his name. However, beside the identities, looking at this statue we feel the idea of royal elegance and it is fascinating because we cannot really read emotions on their faces, but just an inscrutable peace that brings to the eternity.

Even if we think that this dark material is super cool and fancy, it was actually brightly painted! There are in fact traces of red around the king’s ears and mouth and yellow on the queen’s face.

This brings to an interesting suggestion. Since the statue was located in a courtyard, it’s possible that the paint, used to make the figures look real, may have been intended to wear away over time revealing the immortal dark-stone.

Before you play with the interactive image below, I just want to anticipate that in the next post we are going to learn more about the Ancient Egypt looking at a one of the “Books of the Dead”. Thanks for reading!

There is a conventional element missing on the King's head! Can you guess it? The answer in the interactive image below.

The King has no protective cobra perched on his brow. This notable absence led to the suggestion that both king's nemes and queen's wig were originally covered in precious metal and the cobra was part of that addition.

You had the right answer! 🙂 You can see a simulation of the cobra on my Youtube video

The king is holding the ritual rolls enhancing the idea of strong young man, even if the pose make it look really rigid and less natural

The step forward that are both making is something unusual. In fact this action was entirely expected from the king, but not from the females that were depicted mostly with parallel feet.