A Treasure in Pompeii 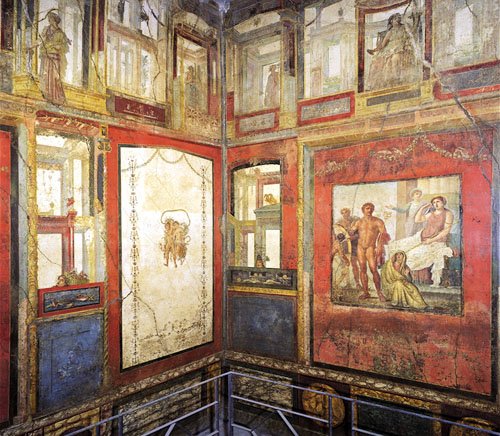 NAME House of Vettii – episode of Punishment of Ixion

Hi and welcome back to Exploring Art with Alessandro!

Today we continue with our exploration in the Ancient Roman Art moving to another important visual art: painting. In particular, we are going to focus on a beautiful example of fresco visible in one of the finest examples of Roman domus: “The house of Vettii” in Pompeii.

Probably everybody knows that in 79 AD Vesuvius erupted in one of the most catastrophic eruptions of all time burying the cities of Pompeii and Herculaneum. It was a huge disaster if we think that the thermal energy released was 100,000 times more than Hiroshima-Nagasaki bombings. But the event “stopped the time” at the moment of the tragedy giving us the opportunity to admire a lot of works of art preserved for 2,000 years.

One of them is “The house of Vettii“. Named for its owners, two successful freedmen: Aulus Vettius Conviva and Aulus Vettius Restitutus, the eruption has preserved almost all of the wall frescos completed in the manner of the Pompeian Fourth Style. It is not my goal today to go over the Pompeian Styles because it is a topic that requires a specific post that I will write soon (but remember that clicking on the linked words you can go to the glossary page and discover more). For the moment I can tell that the Fourth Style’s features are an intense use of framed pictures filled with trompe l’oeil effects (the goal was to create panels with “fake” windows) surrounding a main painted scene.

Here a reconstruction, so you can better understand what I mean:

Today I want to focus exactly on the scene that we can see in the middle: the “unishment of Ixion.

This mythological scene shows the moment of Ixion, the Lapith King, being punished for betraying Zeus. What happened? Well Ixion was really a mess. We can skip the first part of his life when he killed his father-in-law becoming the first man guilty of kin-slaying in Greek mythology. Ixion went mad, lived as an outlaw until Zeus had pity and brought him to Olympus and introduced him at the table of the gods. Instead of being grateful, Ixion attempts to seduce Hera, who was Hera? Zeus’s wife!

Zeus found out about his intentions and made a cloud in the shape of Hera, which became known as Nephele (from nephos “cloud”) and tricked Ixion into coupling with it. As punishment, Zeus banishes Ixion from Olympus and orders Hermes to tie Ixion to a winged fiery wheel, which is to spin for eternity.

In this scene, Ixion is bound to the wheel and Hermes stands in the forefront.

By the way, based on the mythology: which symbols can help to identify Hermes? You can find the answer in the interactive image 🙂

Hermes has one hand on the wheel keeping it still as he looks to Hera. She is enthroned to the right, holding a long golden scepter and wearing a golden crown.

On both figures we can read the painter’s ability (painter who is unknown since they were considered artisans). Hermes’ body is perfectly defined in every muscle without the use of thick lines, but a masterly use of chiaroscuro. Also the curly hair is perfectly painted on the fashion style of the time.

Hera is painted with the same amazing quality: in particular the pose is more “natural” and less “statuary”, the dress made look real thanks to the folds and shadows, but it is the veil that give us the idea we are looking at a great work of art. The painter, in fact, was able to create the transparency of the veil and its lightness!

The result is a remarkable composition that give us, also, information about what was fashionable during the Ancient Roman time both and styles and subjects. It is interesting noticing, in fact, that the main character, Ixion, is confined in a corner without even the face visible… A reminder for the men about the importance of the gods and their power and a clear metaphor about the men’s role in the old ages. Ancient Roman Art: Punishment of Ixion

Hera is really elegant. Less "statuary" than Hermes, she is "enjoying the scene" and we can see how her dress is perfectly depicted in every fold and shade.

Also her hair is perfectly painted on the fashion style of the time. Another evidence of the painter's skills

Hermes is looking at Hera waiting to start the punishment. He is painted with a masterly use of chiaroscuro that defines every muscle!

We can identify him thanks to the winged sandals and caduceus (the staff) in his hand. Good job if you answer correctly 🙂

Discover more on the Punishment of Ixion with many graphic effects