Hi everyone and welcome back to Exploring Art, this is Alessandro. I received some messages asking me to explain what’s the meaning of the terms BC, BCE, AD, CE that even in my posts I often use. It seems like a big mess right? So let’s make it clear. BC vs BCE – AD vs CE explained

The “Problem” of the time

When we talk about time, the main problem is to measure it. This video for example was recorded in 2021, but where did this number come from?

It’s clear that to have the same idea of the time we need to start counting from the same point. For example let’s say that we pick the year you were born as a single reference point. Like that you can tell me that you started going to high school 14 years after you were born and your parents met each other 30 years before you were born.

Now can you imagine the mess if everyone of us would start counting from random moments?

The decision – BC BC vs BCE – AD vs CE explained

So in Europe, during the Medieval Ages, it was decided the point in time from which they would have start counting and they picked the event that for them was the most important in history: the birth of Jesus Christ.

Based on this system, they described any event occurred before the birth of Christ with the abbreviation BC meaning Before Christ.

Because of that, the years before this moment count backwards just like the negative numbers in maths. But instead of saying that an event happened, for example, -500 we can just say 500BC.

As a consequence, the larger numbers in BC happened before the smaller BC numbers. For example Julius Caesar was born in 100 BC and died in 44 BC.

What about AD? BC vs BCE – AD vs CE explained

For the events after Jesus’s birth they decided to use the letters AD from the Latin Anno Domini that means “year of our Lord”. The Lord is of course Jesus again. For example the Emperor Hadrian was born in AD 76 and died in AD 138.

A common mistake: sometimes I hear translating AD as After Death of Jesus. However, as you can see in the timeline that is not possible because we would have 2 starting points and how do we count the years while Jesus was alive?
Now 3 important things:

What about BCE and CE?

Well this is a recent convention of the 20th century wanted by some people who didn’t like the religious origins of the abbreviations and they decided to use new letters that didn’t mention Jesus Christ. As a result they changed BC with BCE meaning Before Common Era and AD with CE, Common Era. However, there are no differences on the measure of the time. The letters changed, but not the numbers. The only difference is that the new abbreviations are placed both after the number of the year. For example we can say that Julius Ceasar was born in 100 BC or 100 BCE and died in 44 BC or 44 BCE. Hadrian was born in AD 76 or 76 CE and died in AD 138 or 138 CE. 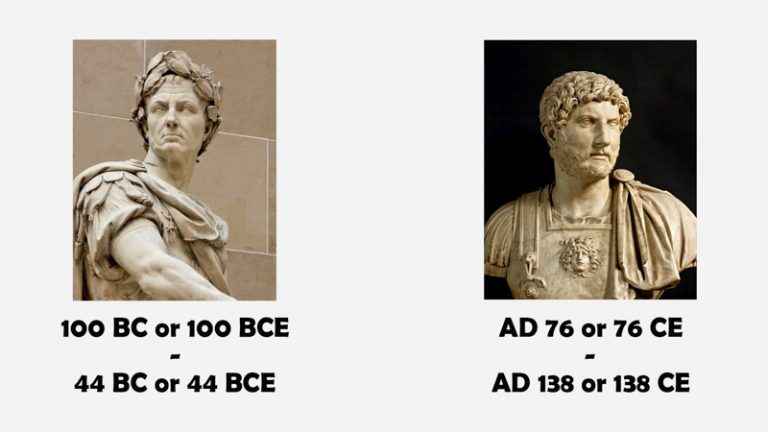 The use of BCE and CE became more popular in the recent years, but you will still see BC and AD since it has been used for many centuries despite if you are religious or not.

So there is no wrong and no right. They are different conventions, but the scale is the same. Just be careful to not mix them.

If you need more examples or you have questions please leave your comments and I’ll be happy to answer. You can also watch the video on the top of the page, but remember to subscribe so you can stay updated.

Thanks for reading and see you in the next episode 🙂

BC vs BCE – AD vs CE explained

The meaning of Chiaroscuro

How Everything started: Prehistoric sculpture

How Everything started: Prehistoric Architecture