This is probably the most famous Bronze David in the whole art history, why? 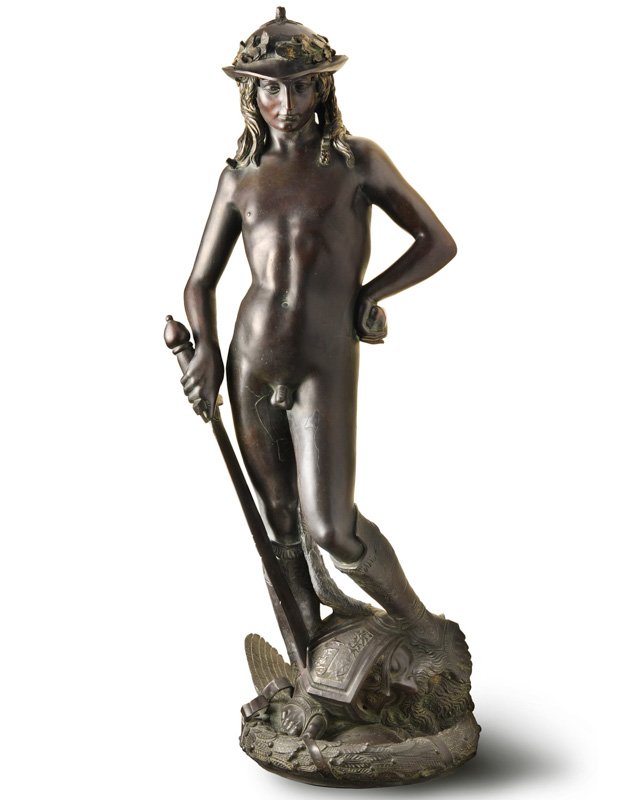 Hi and welcome back to a new episode!

We started 2 posts ago to talk about one of the most beautiful art styles, the Renaissance, and today I want to discover another masterpiece: the statue of David by Donatello.

Donato di Niccolò di Betto Bardi, better known as Donatello, was an early Renaissance sculptor and one of the best ever. Born…(guess where?) in Florence, he studied classical sculpture and he adapted it to the Renaissance style. As I explained in the introductory post, in fact, Renaissance’s foundations were in classical art and often we see a connection between the 2 styles.

In the David we can see that correlation in a beautiful bronze sculpture that is considered one of the finest and most enigmatic examples of Renaissance statues.

The mysterious unknown and the beautiful known

There are many elements that are still a mystery, starting with the date of creation, but also about who commissioned it. Suggested dates vary from the 1420s to the 1460s (Donatello died in 1466), with the majority opinion falling in the 1440s when the new Medici Palace was under construction and where the presence of the statue was recorded by 1469. But it is a guess since there are no evidence or any documentation about the statue before 1469.

What we know for sure is that the bronze sculpture is the first unsupported standing work of bronze cast during the Renaissance and the first completely nude male sculpture made since antiquity! Why that choice? Well I said before how Donatello’s education was classical and the Humanism in Florence was pushing on studying ancient texts with consequences on the new “modern” style.

The result is a nude statue, like the Ancient Greek art, depicting a classical episode: the young David who became a hero after defeating the giant Goliath.

And it is exactly what we have here: a young David standing on Goliath’s severed head (talking about the head do not forget to read the quiz at the end).

But this David is “different“… the lack of armor emphasize his body shape and pose, so we can tell that he is both physically delicate and remarkably effeminate. And how he is bearing the huge Goliath’s sword emphasizes these traits. It’s not a “hero’s physique”, but a gentle, graceful youth.

The reason is that David has overcome Goliath not by physical prowess, but through God. He is wearing just a fashionable laurel-topped hat (laurel is a symbol of glory) and boots. In contrast with the heavy armored helmet of Goliath.

Other elements that make this statue so appealing are the pose and look. David is standing in the position of contrapposto: the weight is placed on one leg with the other leg bent. The purpose is to give a sense of movement and sinuosity. David looks thoughtful and with an enigmatic smile. It is almost impossible to read David’s look and that’s another evidence of Donatello’s abilities!

This statue represents the Renaissance spirit: a mix of classical style with innovations dictated by the contemporary taste and the will of showing all the artist’s skills. Donatello is great on that: he made a statue with a perfect balance of technique and innovation that make it charming. And the charm is given also by the feelings it communicates and what it inspires with its mystery.

A masterpiece that I hope you enjoyed! In the next post we are going to approach the Renaissance painting, so stay curious and let’s continue to explore together!

Donatello made a "mistake" on Goliath's helmet, can you find it? Check the interactive image below for the answer. Suggestion: look the helmet from the back.

David is wearing a fashionable laurel-topped hat (laurel is a symbol of glory).

And it is interesting his face: he looks thoughtfl, with an enigmatic smile and kind of self-confident. Donatello shows his amazing skills on that

Even from the back we have the idea of a youth body. No muscles, but a gentle, graceful young boy

The contrapposto pose amplifies the idea of grace and, combined to the arms and hands' positions, David seems effeminate. So the opposite of the "classical" hero shape...

David is holding Goliath's sword. Symbol of his victory, but it is so big that he couldn't even try to use it in a real fight. In fact, David is holding in his left hand the stone that he used to kill Goliath

David is standing on Goliath's severed head. So we can tell that the only other thing David is wearing are the boots with the left feet on his enemy's face.

Goliath is wearing a heavy helmet and look the back of it..

If you look carefully, you can see that Goliath's helmet has 2 wings. The upper one is way longer than the other.

A mistake? For sure not. Even if we don't really know the reason of this choice. We can guess that Donatello wanted to make the statue more elegant or even more sensual

Don’t miss the video and the graphic effects!

New video! It is one of most important moments of

New video on saturday about one the most important

Merry Christmas! In this video you can enjoy 7 wor

Hi! In the pool on my the Youtube channel you aske

I've just finished a new video that I am going to

On my Patreon you can support Exploring Art with A