I promised a beautiful example of Archaic Greek Art and there we go with a scene depicting two of the main protagonists: Achilles and Ajax! 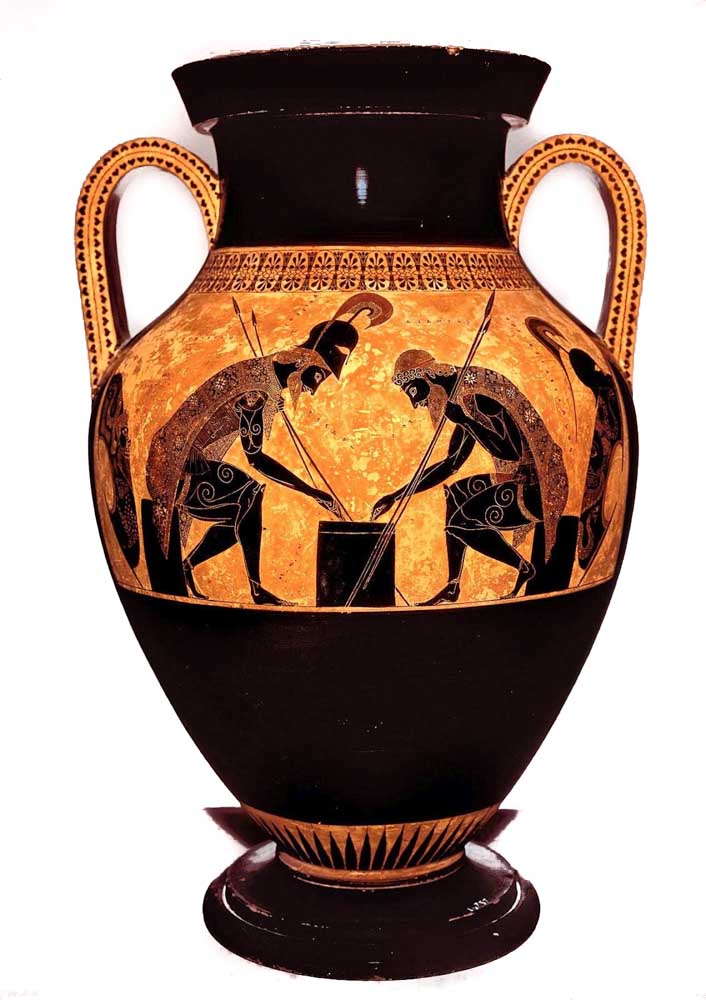 NAME Achilles and Ajax engaged in a game

As I promised in my previous post, today we are going to see a beautiful example of visual art of the Ancient Greek time. In particular we are during the Archaic stage when it was very popular the “painting” on potteries and the artist Exekias was one of the best exponent of the technique.

Achilles and Ajax engaged in a game is one of the finest examples of pottery art and today we are going deeper on reading this Exekias’ work of art.

But first of all: why “painting” on quotation marks? Because the technique is a mix of painting and engraving. The first phases are fairly simple: after modeling the clay to give the shape needed, the pot is covered with an ultra fine grained clay slip. The paint is applied on the areas intended to become black after firing using many tools, both for painting and engraving. The engraving continues also after the firing when the potter can add more details according to the two different styles: the black figure and the red figure.

The black figure is the oldest style and it goes until the end of the Archaic stage: 500 BC. Once again: remember that art does not stop and start immediately in a specific date, so, here for examples, we have many examples of black figure pottery also after the 500 BC. But it is true that the black style started to be less appreciated when from Athens a lot of potteries were designed with red figures.

This new technique is an invention of the late 6th century and it was not just a more fashionable choice. The red figures in fact allows to paint more details with a better final result.

Anyway some potters were real masters even with the black style and Achilles and Ajax engaged in a game is a perfect example of that.

Made between 540-530 BC, it depicts a simple scene, but filled with a lot of information. It depicts a moment of relaxation between the two Greek heroes Achilles and Ajax before the next battle during the Trojan war.

How are we able to identify the characters? Because Exekias was super nice to put the names and make the work way easier to us for once 😉

So we know that on the left we have Achilles and on the right Ajax and we know also what they are saying since Achilles says “tesara” (four in Greek) and Ajax “tri” (three). And, what it’s also important, is that Exekias signed the work of art. We will see that this habit is more common during the Classical and Hellenistic stages, but in the Archaic phase it is something that is getting more popular. That it means a lot in art because it shows how the role of the artist is getting more and more important. This is an important indication of how significant was the pottery art in Greece…

Going back to our scene, we can tell that the two heroes are ready for a battle in every moment since they are still holding the spears, wearing the armors (Achilles even his helmet) and the shields are close and ready.

However, are the spears to tell us a lot. While Achilles is holding his spears more loosely, Ajax seems to be more tense clenching the spears in his fist and make them parallel. We can read this tension also on another “detail”: their legs. While Achilles’ right foot is touching perfectly the ground, Ajax’s one is lifted, pushing the calf and showing tension again and he is also a bit more hunched over.

Exekias tried to show the different tension also on the faces. They look the same, but actually there is a small detail to symbolize the Achilles was more "relaxed". Can you see it in the picture below?

The scene does seem to mean something wider than just a board game. In particular the difficult fate that Ajax is going to face and the difference between him, great warrior but human, and Achilles: still human, but almost invincible. Actually Ajax will outlive his close friend Achilles, carrying him outside the battlefield and fighting for his special armor. Ajax will not obtain it. His anger will make him kill some Greeks and, humiliated, he killed himself.

Still now we remember Achilles as a hero, so probably Exekias wanted to represent in this simple episode the fork that could bring to the glory or end in life, like in a game.

Exekias has been so nice to put the name over the characters, so we know exactly who they are. Here for example we can read "Aiantos" (Ajax in English)

Exekias wrote his name on the work of art. It is one of the first examples in art history with an artist signing his creation.

It will become more common in the next generations, but it is an important step and indication to understand how the role of the artist is getting more significant in the society!

The faces look almost the same, except for one detail... Can you see it?

Ajax's eyebrow is thicker and with a different shape. Like if Exekias wanted to show how Ajax was more tense than Achilles.

Exekias wrote also what the characters are saying. Like in a sort of Ancient comic 😀 Achilles says "Tesara" (the Greek word for four) and Ajax "Tri" (three). Also because of Ajax's tension, we can guess Achilles is winning 😉

Both armors are full of decorations, but we can see how Achilles' one is more rich. It was in fact a "special armor" and Ajax will do his best to have it after Achilles' death

The spears tell us a lot. Achilles' his holding them more loosely showing that he is more relaxed. Ajax, on the opposite, is more tense and the spears get almost parallel because of his tight grip on them

Discover more on Achilles and Ajax engaged in a game!