Hi, if this is your first time on the channel, welcome to Exploring Art. My name is Alessandro and today we are going to understand what are the classical orders and their impact on modern architecture. They are in fact present on many of the buildings that we see every day and, after reading this post, you will understand why and you will be able to recognize them everywhere.

We are going to do it analyzing the differences using drawings and real applications, revealing what there is behind these, literally, building blocks of Western architecture.

But before get started I want to thank you for the support I am receiving and please consider subscribing on the YouTube channel and sharing with your friends, so you can help me to keep this art project free. You can also support me on Patreon where you can find every week new art-inspired wallpapers and imagery.

First of all, the classical orders are styles of architecture that the ancient Greeks developed mostly for their temples over 2,500 years ago. The concept behind these styles is very basic and started even farther, during prehistory, when our ancestors invented the easiest of the building systems called post-and-lintel architecture.

The posts are the vertical elements that support a horizontal piece called lintel. And the idea is so simple that we are still using it today in our homes or even in the most complex buildings.

From this basic, but ingenious and efficient solution, Greeks started to make it fancier and more sophisticated developing three basic decorative systems, or orders, called the Doric, the Ionic and the Corinthian.

These are simply the classical orders. Before analyzing the differences, I just want to make you aware that there are two more orders, the Tuscan and the Composite that have been created by the Romans after being inspired by the Greek styles (reason why we are going to skip them for today).

As I said, the original classical orders are three. Here you can see them in their basic versions: with the Doric that is clearly the simplest, then the Ionic a bit more elaborate and then the Corinthian that is way more complicated. There were also slight variations as you can see in this drawing depicting the orders used in real temples. However, the differences were minimal, reason why we can easily distinguish the three groups.

Let’s start with the oldest: the Doric order. It started to be used around 750 BC in mainland Greece, but we can find beautiful examples also in Magna Graecia (southern Italy) like the Temple of Neptune or Hera II.

In almost every temple it is present, at the very top, a big triangular piece called pediment. I just wanted to mention it because it’s a very significant element, usually filled with colored statues. However, it’s not part of the order that it actually starts immediately below it with the entablature: this horizontal portion. The top part of the entablature, this decorated section, is called frieze. And, just in the Doric order, the frieze is composed of triglyphs and metopes.

Triglyph is a word formed by the prefix “tri”, meaning “three”, and the suffix “glyph”, meaning mark. So literally triglyph means three marks and it’s exactly what we can see on the decoration. Their origin probably came from the time when the temples were built in wood and the triglyphs were wood planks used to cover the beams of the roof. Not by chance, every other one they are aligned directly over the columns.
The space between two triglyphs is filled with the metope that, usually, were decorated with beautiful reliefs (as you can see in this example from the Parthenon).

As we continue moving down, the next element we find is the capital. It is the top part of the column and probably the most recognizable section that can help us to identify the order style. The Doric capital, in particular, is very simple: there is a lower part with a flare and a slab on the top.

Below the capital there is the shaft, and here there are many important elements to remember. The first one is that the shaft is not plain, but there are vertical lines, called flutes, carved all over the surface. They are just decorations, but really useful to give the idea of a lighter and more elegant column. Flutes are always present in the three classical orders; the differences are that in the Doric they are shallower and they are just 20.

Flutes have also another fundamental purpose: as strong vertical elements they have the visual effect of minimizing any horizontal joints. Yes, because the columns or, to be more precise, the shafts, were not carved from one single piece of marble. From this picture of the Temple of Neptune or Hera II we can clearly see in fact that they have different sections, called drums, that simplifies the composition of the full column.

However, as you can imagine, building them was not so easy. Actually, it was quite challenging both for the huge dimensions (that we’ll see soon) and also because the Doric order has another unique, really interesting, feature called entasis. Entasis is a convex curvature used for aesthetic purposes. The Doric columns in fact are not straight, there is a curvature, sometimes slight, other times more evident, probably adopted to give the illusion of greater strength and more height. The real goal of the entasis is actually still a mystery and the theories are many. What we can say is that the Greek architects had probably good reasons to do it because, as you can imagine, building considering that precise curvature was way more difficult and expensive, since they were adopting specific calculations to be sure the dimensions were perfectly proportioned.

What we can tell for sure, even for the other orders, is that the lower diameter is wider than the top one. The goal was to make the column more elegant and give the illusion of more height.

A last Doric column feature, unique once again, is the lack of a base. The consequence is that the Doric order, that remember is the oldest, seems really solid, severe. Not by chance the ancient Roman architectural historian Vitruvius defined it as a masculine order.

Summarizing, the Doric order is formed by an entablature where we can see a decorated top section called frieze and composed of triglyphs and metopes. Then there is the column composed of a simple capital at the top, the shaft with flutes and no base.

Few minutes ago I anticipated we would have seen the dimensions. Here it’s how an adult man would look next to the capital. As you can see, the temples were massive. Just, since the entablatures and capitals are so up high, it’s difficult to understand their real size.

We have seen examples of very ancient temples, what about a more modern building? Here the well-known Lincoln Memorial in Washington DC where the architects adopted the Doric order creating this majestic result.

Let’s now give a look to the second order: the Ionic. As a reference we can admire the Erechtheion: another beautiful temple visible in the Acropolis of Athens. What we immediately notice is the different proportion of the columns that are thinner, making the whole building less heavy and severe. Not by chance, if Vitruvius compared the Doric order to men, in the Ionic he saw the women’s delicacy.

But now that we learnt so much with the Doric order, let’s see how the Ionic differs. We still have the entablature, however, this time the triglyphs and metopes are substituted by a continuous frieze, while the architrave is not a single beam, but is now divided into 3 bands. 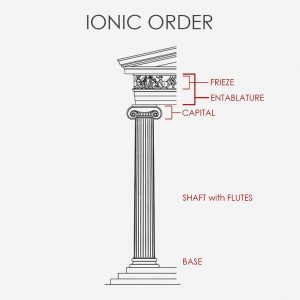 The other major feature that we can immediately notice is the capital. This time way more complex thanks to elegant scroll-like shapes called volutes. On the shaft are still present the flutes, however, they are now deeper and their number increased from 20 to 24.

One last difference: in the Ionic order is always present a base with the consequence that the buildings seem way more sophisticated and show a big step ahead compared to the massive Doric style.

Look for example the modern application on the façade of the British Museum.

The last of the classical orders is the Corinthian and I have good news: it’s identical to the Ionic, except for one detail, the capital. 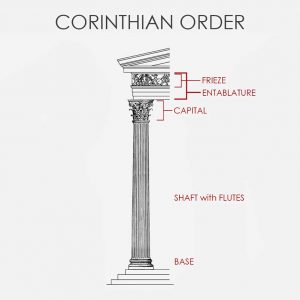 The Corinthian capital in fact is extremely decorated with a particular design inspired by acanthus leaves. Why? Well we don’t know, but there is a legend about a girl who died really young and all their belongings were placed in a basked and put on the top of her grave. Underneath the basket was an acanthus plant which leaves grew out the side.

Beside the inspiring story, for sure the capital is more elaborated and makes the final result even more visually lighter. Reason why Vitruvius compared this order to a girl. Even for the Corinthian we have a modern and well-known example: the United States Capitol.

We should remember that behind the elaborate decorations and math, there is the simple idea of the post and lintel. However, the Greeks designed architectures able to touch the human feelings thanks to perfect proportions and elegance.
These are all the reasons why we are still using the classical orders after 2,500 years and I think from today you will look at the buildings around you in a completely different way.

Please leave your comments and enjoy the video. See you soon.