let’s see why it is so important! Leon Battista Alberti – Palazzo Rucellai 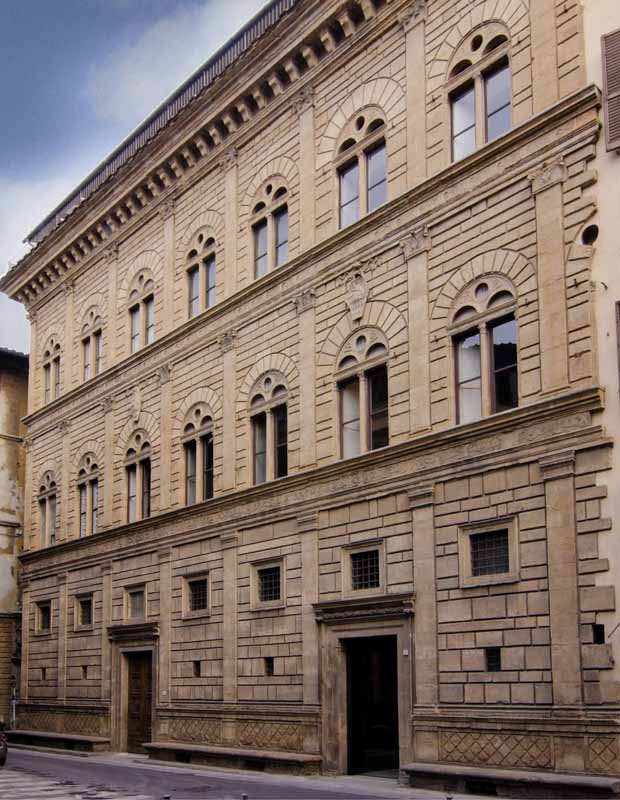 After learning more about one of the most amazing architecture masterpieces in the last post, today we continue to explore Renaissance architecture with another important building: Palazzo Rucellai by Leon Battista Alberti.

Once again we are in Florence, the birthday place of Renaissance art. Like I said in the introductory post, it is not a coincidence that so many artists were in that city free to use their genius and skills. Leon Battista Alberti was one of them. He is often considered “just” as an architect, but actually he was also an Italian Renaissance humanist author, artist, poet, linguist, philosopher and cryptographer. So a man of remarkable culture and a perfect example of “man of his time”. I mean a man with big knowledge able to read the past integrating it in the present’s needs and tastes: the ideal Humanist.

It is “just” a private palace of one of the richest families in Florence: Rucellai. It was a wealthy merchant family and in 1446 Leon Battista Alberti was asked to design a new residence suitable for their needs, but, at the same time, with a unique style.

Alberti reached the goals designing a façade that influenced all the following buildings. Actually, already with his publications, he established some guidelines for the creation of Renaissance works of art (one of the reasons why we consider him one of the “great men” of his time). Here we can see an application of the theories.

The façade is divided into three tiers clearly separated by elegant entablatures (the horizontal space above columns or pilasters) that cut the rusticated stone that give a sense of strength to the entire building. This is true in particular on the first level where the stone blocks are larger and there are small square windows and square portals.

The overall horizontality of the façade is called trabeated architecture and it is broken by the presence of pilasters, or flattened engaged columns, that “support” the entablatures, but actually they have the visual purpose of giving more elegance. On each tier, that decreases in height from bottom to top, the pilasters are perfectly aligned, but they are of three different orders: Tuscan on the first, Ionic on the second and Corinthian on the third.

This is a clear reference to the classical art, both Greek and Roman. In particular, the building recalls the Colosseum which Alberti saw in Rome during his travels in 1430. The Roman amphitheater is divided into tiers and, like the engaged columns on the Colosseum, the pilasters of Palazzo Rucellai have a decorative purposes rather than structural support. Also on both buildings the order of the columns changes going from least to most decorative as they ascend.

Another recall to the Colosseum is clearly the round-arched windows in the second and third tier. The arches, bigger windows and the use of smaller stones give the feeling of lightness in contrast to the ground floor. There is a reason to that. The first tier (or ground floor) was for business and it was important to protect it from breaking in.

The second (called piano nobile) was instead the main formal reception floor and the third the private family and sleeping quarters.

There is actually a fourth “hidden” story under the roof. Pretty dark because almost without windows, it was for servants.

On the façade is visible an important decorative element very common in the classical architecture and, because of that, very useful for us to know. It is an Italian word: Cornice. Can you find it in the interactive image below?

Now probably you understand better what I meant when I said that Alberti was able to read the past integrating it in the present’s needs and tastes. In his architecture we can find this beautiful combination that made him one of the best Renaissance Architects able to influence his contemporaries and the next generations!

We are going to discover more about Renaissance soon, but from the next post we will explore a new interesting, and still mysterious, Art topic, so stay curious! Ciao! Leon Battista Alberti – Palazzo Rucellai

You found the Cornice! Good job! This decorative element, clearly inspired by classical temples, divides the facade from the start of the roof.

This elegant entablature divides the second and third floor. Very similar to each other, the main difference is that on the third floor the pilasters have a Corinthian style, while on the second it is Ionic.

The second floor was the main formal reception floor, the third the private one.

The round-arched windows are another reference to Colosseum. They give elegance to the entire structure making it look lighter

The pilasters have decorative purpose. They "break" the horizontal lines making an elegant grid structure that helps to give the idea of order in the viewer (and in the city, in line with the Humanist theories)

The stone blocks on the first (ground) floor are bigger and, with the small square windows, they give the idea of a solid and safe building.

Enjoy the exaplanation with graphic effects!