Hi everyone and welcome back to Exploring Art, this is Alessandro. We are in third episode of the Sumerian art series and we are discovering a lot about this ancient and advanced population who developed a lot of stuff, like, for example, the first written language. Statue of Gudea

And that’s why I picked this little Statue of Gudea. It is actually 44 cm (17.3 in) tall, so not super small. But if you look carefully, you can see that on his robe there are a lot of symbols, so let’s start to find out the meanings. 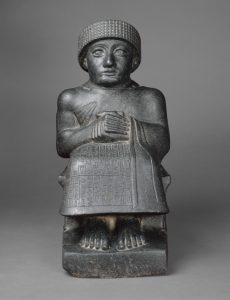 First of all, don’t get tricked by the pose and his kind of funny proportions because this guy here was an important Sumerian King. His name was Gudea and he was the ruler of the city-state of Lagash in Mesopotamia. If you want to know more about Mesopotamia and its origins check the introductory post. By the way click here to check also my Patreon where you can download a lot of cool stuff and, at the same time, support this project.

Back to our King. He ruled Lagash, a very important city-state, from 2150 to 2125 BC circa and he devoted his energies to rebuilding the great temples of the city installing statues of him inside them. So many statues of Gudea survive.

This one is dated back around 2090 BC and it depicts the king in the seated pose of a ruler with his hands folded in a traditional gesture of greeting and prayer.

On his face we can see serenity and calmness and he is not represented like we would expect from a powerful king.

The King's robe is very simple and the simplicity is also clear thanks to another detail. Can you see it? (the answer in the interactive image below)

His head, I know you are thinking that, is really big compared to the rest of the body and even his hands and feet are too big.

Plus even the pose is not natural: the king is seated, but the torso seems attached to the chair and the legs are too short and in a weird position. Statue of Gudea

The Message Statue of Gudea

However, even if the statue seems messy, looking at it we feel peaceful and calm. And that’s exactly the message that the sculpture wants to communicate.

The Sumerian inscription on the king’s robe in fact is a prayer:

When Ningirsu, the mighty warrior of Enlil, had established a courtyard in the city for Ningišzida, son of Ninazu, the beloved one among the gods; when he had established for him irrigated plots(?) on the agricultural land; (and) when Gudea, ruler of Lagaš, the straightforward one, beloved by his (personal) god, had built the Eninnu, the White Thunderbird, and the…, his ‘heptagon,’ for Ningirsu, his lord, (then) for Nanše, the powerful lady, his lady, did he build the Sirara House, her mountain rising out of the waters. He (also) built the individual houses of (other) great gods of Lagaš. For Ningišzida, his (personal) god, he built his House of Girsu. Someone (in the future) whom Ningirsu, his god – as my god (addressed me) has (directly) addressed within the crowd, let him not, thereafter, be envious(?) with regard to the house of my (personal) god. Let him invoke its (the house’s) name; let such a person be my friend, and let him (also) invoke my (own) name. (Gudea) fashioned a statue of himself. “Let the life of Gudea, who built the house, be long.” – (this is how) he named (the statue) for his sake, and he brought it to him into (his) house.

“Let the life of Gudea, who built the house, be long.”. The house is the temple where the statue was located and Gudea is asking for a long life.

And it’s funny because we can read also “ He (also) built the individual houses of (other) great gods of Lagaš.” like in the attempt of having the god to be more considerate.

Despite the style (we need to remember in fact that this statue is 4,000 years old) what’s important is the message. And it’s important because the sculpture communicates in 2 ways: the physical appearance and the written text and they are coherent.

I hope you enjoyed this post and in the next episode another important artifact. Check my Youtube channel to enjoy the graphic explanation and remember to subscribe if you haven’t done it yet. Ciao! Sumerian Art

The crown is really basic, as well as the King's robe. He looks humble, so if you guessed correctly to the quiz, good job!

The King's face shows serenity. He is perfectly calm and he doesn't have a proud look like we would expect from a king.

Then yes: the head is not proportioned to the rest of the body, but we still need to remember this staute is 4,000 years old

Like head and feet, even the hands are not proportioned to the rest of the body. However, once again they communicate calm. Gudea in fact is praying the God of the city to have a long life (since he built many temples in the city of Lagash)

One of the main reasons why I picked this staute is because of the robe. If you look carefully in fact, you can see that there are come inscriptions made with the most ancient alphabet: the cuneiform!

So this statue tells us a story in 2 ways: the body and the written content. That makes it really special and useful to understand this ancient and advanced population

The statue honestly doesn't look like David. It is not proportioned: the torso is too short and the legs as well and they make it look "unnatural".

However, what is important for us is the successfull attempt on communicating a message that is coherent between the appearance and the text on the robe