Hi everyone and welcome back to Exploring Art, this is Alessandro and today we are going to discover one of the most important artifacts of the Sumerian art: the Stele of the Vultures. If you missed the previous episode of the series you can click here.

As you can see, we have just few fragments, however even these pieces can tell us a lot. 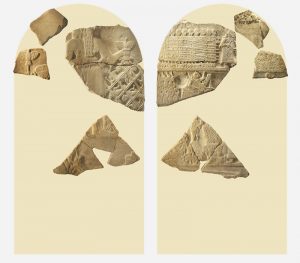 NAME Stele of the Vultures

When and Where? Stele of the Vultures

First of all: when and where? This monument is dated around 2600 – 2350 BC and it was made to celebrate a victory of the city-state of Lagash over its neighbor Umma, so we are in Mesopotamia.

The fragments in fact were found at Tello in southern Iraq in the late 19th century.

The bas-relief would have been 1.80 meters (5 ft 11 in) high, that’s why sometimes I call it “monument”. And It was made out of a single slab of limestone with carved reliefs on both sides. On one we can see a mythological scene and, on the other, the historical episode of the military campaign against Umma that we are going to read together.

This side tells a story arranged on the stele in accordance with the traditional system of registers. These 4 sections.

Stele of the Vultures’ First and second registers

In the upper register, the king of Lagash, Eannatum, is marching at the head of his army. Just half of his head is visible, but we can identify him thanks to his helmet. He is wearing a woolen tunic over the left shoulder while the right one is uncovered. Behind him, the soldiers are marching in serried ranks carrying long pikes and tall rectangular shields. And if we look carefully we can see that the triumphant army is stepping over the enemies’ bodies, on which a host of vultures has already begun to feed. The stele takes its name from this scene.

The inscription proclaims: “Eannatum struck at Umma. The bodies were soon 3,600 in number …“

So we are sure about the event and that is another reason why this monument is so important.

The second register shows what seems to be a victory parade. The soldiers march in two columns holding their spears raised behind their king, who is mounted on a chariot.

The third register, much of it missing, shows the funeral ceremony. On the right a small part of a possibly seated figure can be seen, while on the left the scene is more complete and we can see the soldiers of Lagash climbing up a ladder with baskets of earth on their heads to bury the heaped bodies of their comrades. An important detail that shows how king Eannatum has been triumphant, but respectful of the enemy, so a good advertising as well.

And the fourth register? Can you see it? (the answer in the interactive image below)

Conclusion Stele of the Vultures

The scenes are very important, but probably the text written in Sumerian cuneiform script is even more. It is possible to read in fact that the stele was commissioned by Eannatum and a description of the events.

That makes this monument really useful to understand this ancient population. For the moment we stop here with the Sumerian series, but our journey continues with a new series in the next episodes. Subscribe to the YouTube channel so you can stay updated and check also the contents on my social medias and Patreon. Ciao!

In this little piece, if you look carefully, you can see a hand holding a long spear that touches the head of an enemy.

Congratulations: you found the fourth register!

Sumerian Architecture: Ziggurat of Ur