Hi everyone and welcome back to Exploring Art with Alessandro. We are in the second episode of the Romanticism series and today I want to talk about a painting that represents really good this style features. The Bard by Thomas Jones. If you missed the first episode here the link. Thomas Jones – The bard 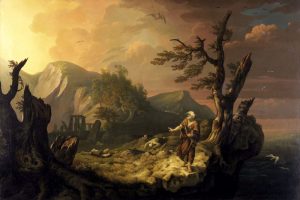 On a first sight what catch our eyes is for sure the landscape with this beautiful warm colors and cloudy sky that fills half of the painting. And in the rest of the picture is clear the presence of the nature more than the humans, except for the old man on the edge of the cliff who he is looking back.

If you are thinking he is distracted and he doesn’t realize he is falling the answer is no, unfortunately.

Actually he knows what he is doing. This old man is the last surviving bard in Wales. Based on Thomas Gray’s poem The Bard, the tale tells the story of Edward (the) I’s legendary massacre of the Welsh bards.

The Bards Thomas Jones – The bard

Bards were highly regarded in Welsh society at that time, and were thought to be descendants of the Celtic druids. That’s why Jones painted him with druidic features: a long white beard and hooded robe. To emphasize this connection, on background we can see some stones in circle like in Stonehenge that Jones skillfully depicted almost melting them with the natural environment.

The architecture is actually some ruins consequence of Edward’s attack and, if we look more carefully, we can see also the massacre. On the ground there are 3 bards, wounded to death, with their harps (symbol of the bards) next to them, that Jones, once again, painted like if they are losing their human features becoming part of the soil.

But for sure the scene is dominated, not by chance, by the nature and the bard. And we shouldn’t be surprised since one of the main Romanticism features is the sublime. The feeling we have when we are looking at something with a greatness beyond all possibility of calculation.

Like here with this beautiful sunset metaphor of the end of a group of people and a tradition that left some tracks that are already disappearing. However, the nature is not against the man. And the very strong wind coming from the right seems to push the bard away from the cliff pushing him to live.

The wind’s strength is visible on the trees and the bard’s robe and beard. But he took his decision: he is leaving the world with a hand gesture that is at the same time a goodbye and a curse on the beloved English invaders.

And we can see also Edward and his cavalry in the scene. Can you see find them in the interactive image below?

So in this painting we can see perfectly the Romanticism essence. Strong feelings consequence of human actions and the man as single that is protagonist in the world, but with the nature, apparently in background, that emphasizes these feelings reaching the awe that we can feel in front of this work of art.

I hope you enjoyed this post, leave your comments and don’t miss the next episodes because I am preparing other interesting contents for you. Ciao!

This beautiful sunset fills the scene with a warm color. And the cloudy sky is actually one of the protagonists in the scene filling more than a half of the painting

This old man is the last surving bard. Jones painted him with druidic features as tradition while he is making his last step in the world...

the end not just of a man, but a long tradition and culture

Here very far in background there is Edward I with his cavalry. If you saw it without this hint good job!

Jones depicted them very far on purpose because the attention should be more on the main protagonists: the bard and the nature

On the ground, difficult to see, there are 3 dead bards. Jones depicted them like if they are disappearing.

Metaphor of what it is going to happen with their heritage...

Friedrich – Wanderer above the Sea of Fog

Why the tragic “The raft of the Medusa” was considered scandalous?