Hi everyone and welcome back to another episode of Exploring Art with Alessandro. Today I want to talk about one the most famous drawings by the great Leonardo da Vinci: the Vitruvian Man, explaining why it is so important. Vitruvian Man importance 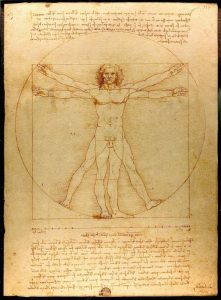 We are around 1490 and Leonardo drew with ink on paper a man in two superimposed positions with his arms and legs apart and inscribed in a circle and square.

It is accompanied by notes based on the work of the ancient Roman architect Vitruvius. That’s why the name Vitruvian Man and it represents Leonardo’s idea of the ideal human body proportions inspired by the book De Architectura by Vitruvius.

The Roman architect in fact described the human proportions in relation to the two geometrical figures considered perfect: the square and circle.

However, Leonardo didn’t use the same Vitruvius’ proportions, but rather included those he found himself measuring male models.

But what was the purpose on doing it? Well it was a fundamental Renaissance idea. For centuries, during the Middle ages, men had a passive role in the universe depending on fate or god. In the 15th century, the rediscovery of classical Greek philosophy became the foundation for the Renaissance Humanism.

Humanists’ goal was to make a citizen able to be engaged in the civic life with virtuous and prudent actions with benefits for the whole community. So every single person was potentially able to make a difference. That’s true also for the artists. While before they were mostly considered craftsmen, now the society was ready to recognize their important role.

The man started to be at the center of the Universe. Humanists believed that the individual encompassed “body, mind, and soul” and, at the same time, “Man is the measure of all things” (Protagora).

So in this sketch Leonardo put the man inside the perfect circle and square proving the importance of human proportions and how the man could actually be the center of the Universe, not just with his body, but also with mind and soul.

Because if it’s true that our body fits with geometry and mathematics and, as a consequence, architecture. It’s true also that we can reach admirable goals just if we combine it with our brain and values.

The Vitruvian Man represents this balance that was fundamental during Renaissance and it gives us a reason more to appreciate better the genius of Leonardo da Vinci.

Enjoy the video on the Youtube channel and let me know what you think about this topic. Ciao! Vitruvian Man importance

Raffaello explained in 7 works of art