Today we are going to discover some of the first Gothic sculptures in the Chartres Cathedral – West Façade Left Door’s! 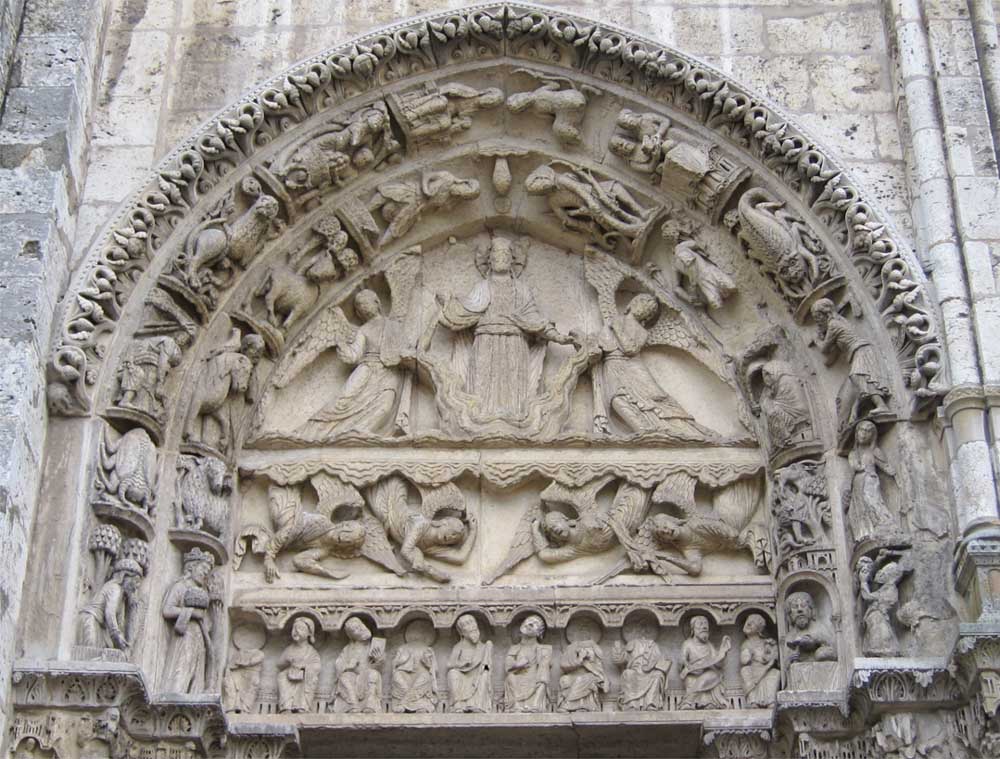 Today we are going to discover more about Gothic Art: in particular the role of the sculpture.

In the previous posts we learnt how the Gothic style developed from architecture and the sculpture was not really following that evolution. Gothic sculptures are a heterogeneous group of works of art that differ on their purposes and styles. We have in fact portable sculptures, decorative sculptures, tomb effigies, monumental sculptures with many variants based on the region.

Here today I want to focus on the monumental sculpture because of its connection with the architecture and the communication role in the society. Why that? Well because we need to remember we are during one of the most complicated historical moments: the Middle ages. A period of time full of meanings, uncertainties, fears and hopes that affected the society that was living on a difficult balance between a material/temporal level and mystical/”unknown” one.

We can find these elements in the left door’s sculptures of the Chartres Cathedral’s west façade.

Located in Chartres, France, about 80 km (50 miles) southwest of Paris, it is one of the most beautiful Gothic cathedrals. The sculptures on the three west portals (the Church’s “entrance”) are some of the finest and oldest examples of Gothic monumental sculptures.

Each portal (circa 1145-55) focuses on a different moment of Christ’s role in the world: on the left his Ascension or Second Coming, in the center Christ in Majesty and on the right the nativity.

The left portal is the most enigmatic one since we still do not know exactly if the tympanum‘s scene depicts Christ’s Ascension or the Second Coming of Christ. What we know for sure is that Jesus stands on a cloud, apparently supported by two angels. Other four angels below him are shouting to ten mysterious figures in the lintel.

The archivolts contain a combination of zodiac’s signs and labors of the months. This association is common in many Gothic portals and it represents perfectly how the nature cycles’ depend on the seasons, but there is also a deeper mystic meaning.

The labors of the months have an important significance because they depict 12 rural activities that commonly took place in specific months of the year. In a society based on agriculture, that have a vital didactic meaning. However, the connection with astrology give us the idea of how human affairs and terrestrial events were considered a consequence of not well-known mystical events.

On the bottom left we can see some combinations: like Cancer and a harvest (probably wheat). At their side, Aries with a human figure pruning a tree.

Talking about combinations: there is just one scene "indoor". Can you find it in the interactive image?

On the right side the attention goes to the Scorpio that is above a man plowing (we are in October).

The Scorpio in fact is well defined in every detail. However, it is far from the “realism” that we can see in the other figures and with a clear attempt of making it scary. We are looking at one of the first examples of evil creatures that are present in the Gothic cathedrals and made this style so enigmatic and evocative. Also because of that, I will prepare soon more posts about it.

From our point of view, it could seem really weird the combination of astrology, religion and monsters, but it can give us the idea of how Middle Ages were a very difficult time based on thin balances.

But it is exactly from these thin balances that our ancestors came out with brilliant solutions that we are going to explore in our journey!

The two archivolts contain a combination of zodiac's signs and labors of the months.

Scorpio, in combination with the man plowing, represents October.

It is depicted in every detail, even if it is not real at all. It seems in fact that the main purpose was to sculpt a scary figure... and they succeeded!

Other Zodiac's signs: Leo on the left and Taurus on the right

In the Tympanum we have the main scene: Christ's Ascension or the Second Coming of Christ (it's still not clear).

Four angels are shouting to ten figures in the lintel. We don't know who they are, but they look at the angels like trying to understand what is happening

Here at the bottom we have Capricorn and below it the only indoor scene of the portal. In fact we are in December and there are no jobs in the fields