Hi everyone and welcome back to Exploring Art, this is Alessandro and today we are going to find out why the Tower of Pisa is not straight and why it doesn’t fall over.

We are in Tuscany and the Tower of Pisa (torre di Pisa in Italian) is actually the campanile, or freestanding bell tower, of the majestic Romanesque cathedral of the Italian city of Pisa. 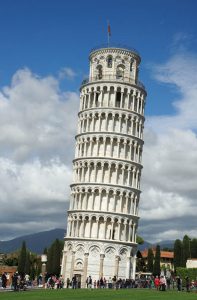 The height of the tower is 56.67 meters (185.93 feet) on the high side and by 1990 the tilt had reached 5.5 degrees, reason why the Italian government enlisted a team of top engineers to stabilize the tower. There’d been many attempts during its 800 year history. However, they mostly made things worse and what’s interesting is that the new team, after many calculations based on computer models, found out that the campanile would topple if it reached an angle of 5.44 degrees !

But the tilt reached already the 5,5 degrees, so everyone was super scared and they started to rush on the attempt of saving the Tower . Let’s make a step back to see what happened.

The construction began in 1173 when Pisa was a wealthy city-state and was able to afford the best architects and engineers. However, they made a mistake. Pisa’s name comes from a Greek word for “marshy land”, that doesn’t sound like the best situation to build a tall tower, right?

The start of the problems

The soil in fact is rich on clay, mud and wet sand. Even Romans were aware of that and that’s why they used to put massive stone pillars under the constructions to make them more stable.

However, the tower’s architects believed that just a 3 meter foundation would have been enough to support the building.

Well they were wrong since, already 5 years later, the campanile’s southern side began to sink . Continue building it in that condition would have meant the collapse of the structure since the weight of the upper stories would have been too much. However, a tragic event was actually a serendipity. Pisa was involved in a long warfare and so the construction stopped at the fourth story for almost a century giving to time to the soil to compact. And when construction began again in 1272 the foundation was slightly more stable and the new architect, Giovanni di Simone, decided to compensate the tilt by making the next 4 levels taller on the southern side.

However, what’s the direct consequence of this choice? That they added more material to compensate the height and that meant more weight. As a consequence, the first attempt of fixing the issue, made it worse since the tower started to sink even more.

For the time the tower was completed, the angle of the tilt was 1.6 degrees!

For centuries, engineers tried many solutions. In 1838, they dug a walkway around the base to check on the sunken foundation. But like that, they removed part of the settled soil. Bad idea, really bad.

In 1935 it was decided to inject mortar to strengthen the base. Like a sort of botox. However, the injection was not well distributed below the foundation and that was another bad idea.

With such an instable soil, it was impossible to predict if the tower would have felt or when and adopt effective countermeasures to save it.

Just in the 1970s the engineers calculated the campanile’s center of gravity. And, thanks to computers, find out how stiff the soil was and the possible solutions.

The best one seemed to be to remove some soil from the northern side. So, in 1992, the team drilled diagonal tunnels removing 38 cubic meters and they temporarily counterbalanced the structure with 600 tons of lead ingots while the anchored the base with steel cables.

Finally, after six centuries from its construction the tower of Pisa was straightened to an inclination of about 4 degrees and that’s what we can admire today.

It’s a great example of beauty imperfection, but also of stubbornness and fate since the tower withstood to earthquakes and gravity.

I hope you enjoyed the post, click here to support this project with Patreon. Thank you, ciao!