What does that tunnel hide?

I am going to tell you soon what is that because you couldn’t believe it is one of the most important Ancient Roman Art (/artifacts): Cloaca Maxima!

Let’s learn more about it! 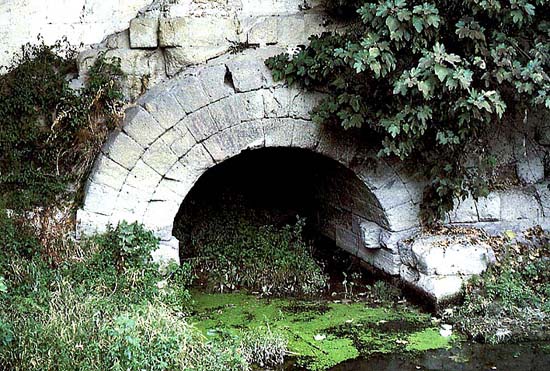 Hi and welcome back to our journey! We are finally arrived to learn more about Ancient Roman Art. In the last post I gave you a general introduction to know more about Romans and their arts/approaches. And today we are going deeper in the Roman architecture.

With what?? Cloaca Maxima! They are 2 Latin words: Maxima means “greatest” and Cloaca means “sewer”. Now you are probably wondering if I got crazy talking about a sewer But there are a couple of very important reasons why I picked it.

This sewer represents perfectly how Romans were and the reasons of their successes. Ok now I know there are a lot of easy jokes that can be inspired by last sentence, but let me explain to you better 😉

We know the Romans for their pragmatism. In the first centuries of their history, in particular, their approach was extremely practical and finalized to the most efficient result more than look to the “style”.

Because of that they knew that to be successful against the enemy that surrounded them, they needed to build a safe and efficient city. That is why some of the firsts important constructions they built were the Servian Wall and Cloaca Maxima. You can be protected from the enemies inside your walls. However, if you live in a unhealthy environment, you will find yourself fighting against a worst enemy: invisible and unbeatable.

According to tradition, it may have been initially constructed around 600 BC under the orders of the king of Rome, Tarquinius Priscus. It was built as an open-air canal and, over time, the Romans covered over the canal and expanded it into a sewer system for the city. Yes, but how did they covered it?

They did it with the successful architectural element that made Romans famous: the arch. To be precise they used a series of arches placed side by side to make a barrel vault.

The vault allowed to build over the sewer as building space within the city became more valuable. And most of the space over was reaaaally valuable since it drained from the center of town, below the ancient Forum, Velabro and Foro Boario to the river Tiber.

It was so important that the Cloaca Maxima was well maintained throughout the life of the Roman Empire thanks to a constant maintenance and also to a smart use of water supply. The eleven aqueducts which supplied water to Rome were finally channeled into the sewers after having supplied the many public baths, public fountains, imperial palaces and private houses. That continuous supply of running water helped to remove wastes and keep the sewers clear of obstructions! And these sewers merged in the main trunk of the system: the Cloaca Maxima.

Like that all the waste and black-waters were pushed outside the city under a long 20 feet underground tunnel keeping the city healthier and efficient! So efficient that even today, after 2000 years, Cloaca Maxima is still working draining rainwater and debris!

Now some fun facts to understand how important was this construction for the Romans. In 33 BC it is known to have received an inspection and overhaul from Agrippa. A Roman consul, statesman, general and architect close friend, son-in-law, and lieutenant to Gaius Julius Caesar Octavianus.

And Cloaca Maxima had also its own goddess: Cloacina, “The Cleanser”!

Now that we know how Rome was underground we can start to explore better the “surface” that it couldn’t be like we know it if it wasn’t for this engineering masterpiece. So don’t miss the next episodes of the Ancient Roma Art and enjoy the video. Ciao! Ancient Roman Art: Cloaca Maxima

The Pantheon: why it still inspires modern architecture?