This ceremonial palette is one of the most important Egyptian artifacts!

Let me tell you why Egyptian Art Palette of King Narmer 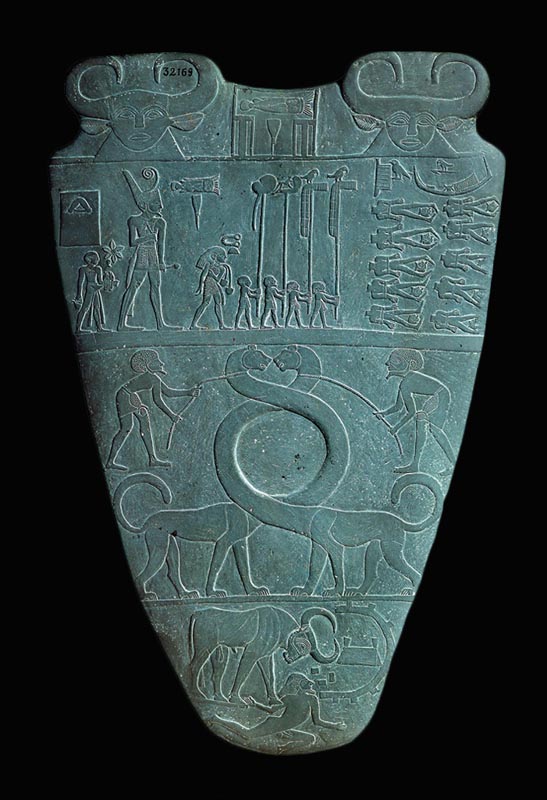 As anticipated in the last post, today we are going deeper in the Ancient Egyptian Art exploring a very important and still enigmatic artifact: the Palette of King Narmer.

Dated from about the 31st century BC, it contains some of the earliest hieroglyphic inscriptions ever found. They are made on a 63-centimetre-tall (2.07 ft), shield-shaped cosmetic ceremonial palette, carved from a single piece of flat, soft dark gray-green siltstone.

Among all the stuff I just said probably now you are wondering… “cosmetic ceremonial palette”?? Let me explain why this object is so significant even if you are not a make-up artist.

The Palette, which has survived five millennia in almost perfect condition, was discovered by British archeologists James E. Quibell and Frederick W. Green, in what they called the Main Deposit in the Temple of Horus at Nekhen in 1897-98. It has been suggested to be a royal donation made to the temple since the object itself is a monumental and very elaborate version of a type of daily use palette used for grinding and mixing cosmetics. Palettes were generally smaller, flat and minimally decorated, but these larger and decorated ones were used in temple ceremonies. Narmer’s palette is one of the finest and oldest examples and it does not surprise to be found in Nekhen, or Hierakonpolis. It was, in fact, one of four power centers in Upper Egypt.

Back to the 31st century BC, the time of our palette, Egypt was divided in Upper (southern) and Lower (northern). Just after the unification, the Dynastic period started making Egypt a powerful and flourishing reign.

And here is where our story starts.

The palette, carved in raised relief, in fact depicts King Narmer on both sides in two ambiguous scenes. Ambiguity given, not only, but also, since on one side he is wearing the bulbed White Crown of Upper Egypt, and on the other side the Red Crown of Lower Egypt.

On both side the king is represented in human form, but of course in hierarchic scale, followed by his sandal-bearer. We know for sure is King Narmer since on the top of the palette, on both sides, are the central serekhs bearing the symbols n’r (catfish) and mr (chisel). They are phonetic representation of Narmer’s name.

In the front, the king holds a mace and a flail, two traditional symbols of kingship and he is wearing the Red Crown of Lower Egypt. To his right are the hieroglyphic symbols for his name, though not contained within a serekh. Behind him also his sandal-bearer’s name may be represented by the rosette appearing adjacent to his head. Immediately in front of the pharaoh is a priest and four standard bearers.

At the far right of this scene are ten decapitated corpses, with heads at their feet, possibly symbolizing the victims of Narmer’s conquest.

Below the procession, two men are holding ropes tied to the intertwining necks of two serpopards. The serpopard is a mythological creature: a leopard with long snaky neck. The circle formed by their curving necks is the area where the cosmetics would have been ground.

At the bottom of the Palette, a bull is knocking down the walls of a city while trampling on a fallen foe. The bull could represents the king since often the pharaoh is referred to as “Strong Bull”.

The back of the palette is clearly dominated by Narmer who is going to kill with a mace a defeated enemy. Above the prisoner a falcon, representing Horus, perched above a set of papyrus flowers, the symbol of Lower Egypt.

Horus is holding a rope attached to a man’s head emerging from a marsh (another symbol of Lower Egypt), but the meaning is still mysterious.

What it is clear is that on the back the King is wearing the White Crown of Upper Egypt. Because he is wearing the two crowns (this is the first example where both are used by the same ruler), the main interpretation seems to be that the tablet represents the unification of Upper and Lower Egypt happened thanks to the king Narmer who defeated his enemies.

More recent interpretations suggest that the palette represents the balance between order and chaos. It was in fact a fundamental element of the Egyptian idea of the cosmos. Or even the daily journey of the sun god that becomes another base in the Egyptian religion in the subsequent centuries.

I think the opportunity to read the palette in different ways is really fascinating and another example of how much we still need to understand from this amazing culture.

But the Palette of King Narmer was (so “is” for us) really important because it is one of the first works of art filled with iconographic characteristics that are going to remain conventional for 3000 years! The two-dimensional and profile figures, the scene organized in horizontal zones known as registers, the use of the hierarchical scale, the symbols, the pose of Narmer ready to smash his enemy’s skull… Will continue to be utilized from this time until the Roman era!

And we will see them in the next episodes, leave your comments and please share the post. Ciao!

We learnt that during the ancient Egypt all the figures were depicted based on a specific convention, but there is something unusual in this palette…can you find it? The answer in the interactive image below.

On both sides, on the top, are visible the serekhs indicating Narmer's name with the phonetic symbols of catfish and chisel.

That makes clear who is the King depicted in the scenes

We know (and it is evident in the palette too) that Egyptians used to depict people and animals viewed on profile, but the bulls on the top are frontal!

Did you find it without this hint? If yes good job: you solve the quiz! 🙂

This is the back of the palette and we can see that the King Narmer is wearing the bulbed white crown of Upper Egypt while he is going to kill an enemy with a mace.

Horus, here represented as a falcon, is holding a rope attached to a man's head emerging from a marsh (symbol of Lower Egypt). We don't know the meaning, but for sure it makes the scene more cruel and creey

In the front the King is wearing the Red Crown of Lower Egypt during a procession.

In front of him a priest and four standard bearers. While on the right there are 10 decapitaded corpses. Possibly symbolizing the victims of Narmer's conquest.

In the middle of the palette there are two serpopards. Mythological creatures that, with their necks, form a circle where the cosmetics were grounded

Discover the Palette of King Narmer with many graphic effects!