This bas-relief signed the Renaissance start! How is it possible…?

…let me tell you why 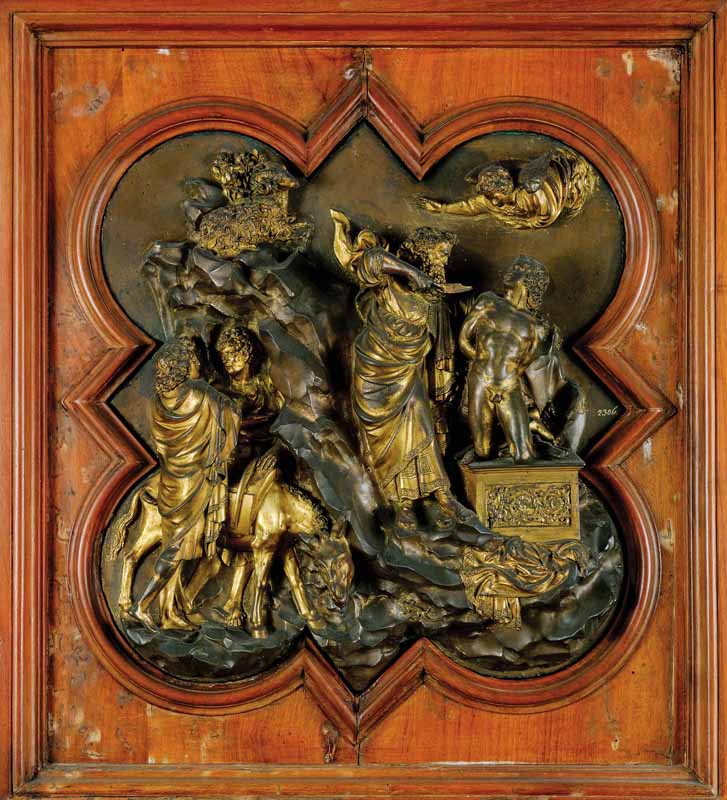 Today we are going to learn more about a work of art recognized as a major masterpiece of the Early Renaissance: the bronze doors of the Florence Baptistery by Lorenzo Ghiberti.

I want to focus on one specific scene: the Sacrifice of Isaac because it has been the relief that allowed Lorenzo to win the contest and start his successful career.

But let’s go in order, so we can appreciate more that fascinating story.

Lorenzo Ghiberti was born in Firenze in 1378 and trained as a goldsmith and sculptor since when he was really young.

In 1401, the Arte di Calimala (Cloth Importers Guild) announced a competition to design doors which would eventually be placed on the north side of the Baptistery of Saint John in Florence.

The opportunity was amazing both because the Arte di Calimala was one of the richest guilds (/corporations) of Florence and because the Baptistery was one of the most important religious monument in the city and really loved by the people.

Win that competition meant gain fame, success, glory and, of course, a lot of money and probably more contracts…

Here we have two important elements to consider: the date 1401 and the competition.

For many historians this event in 1401 is the official start of the Renaissance (see my introductory post to learn more about it). The reason is because it is a sort of breakthrough on style compared to the Gothic and because the contest itself is an indication of a new approach. The choice of making artists compete for a contract was something new, an approach finalized to pick the best artist and reach the best result. And the competition was also a huge motivation for the artists on improving and create something new.

The rules were simple and clear: each participant was given four tables of brass, and was required to make a relief of the “Sacrifice of Isaac” on a piece of metal that was the size and shape of the door panels. They had one year to prepare the scene and the artist who was judged the best was to be given the commission.

It worked out: the best artists competed and, after some selections, in 1402 the finalists were Lorenzo Ghiberti and Filippo Brunelleschi. The problem was that the judges could not decide and the two artists were asked to work together. But a 25-year-old Brunelleschi (we will learn more about him in the next posts) was too proud to accept that and he went to Rome to study architecture leaving the 21-year-old Ghiberti to work on the doors himself!

Ghiberti won: he had his contract thanks to this beautiful relief.

As you can see, one of the main difficulties was to fill a space formed by a square and a quatrefoil. A quatrefoil is a decorative element formed with four partially overlapping circles of the same diameter and it was a typical shape used during Gothic and Renaissance eras.

This is an example, like I said in the introductory post, of how Renaissance is connected to the Middle ages. Not only that, but, if we look carefully at the scene, we can see that Lorenzo himself is a “bridge” between Gothic and Renaissance. Let me explain to you why.

The scene refers to the biblical event of God telling Abraham to sacrifice his son, Isaac. Lorenzo depicts the moment when Abraham begins to comply, but an angel, sent from God, interrupts him saving the son.

It is a picture of an instant and Lorenzo is really good to capture it dividing the scene in 2 parts: on the left the mountain with a ram (that it is going to be sacrificed after Isaac was saved) and 2 servants with a donkey; on the right the dramatic moment of the sacrifice in contrast with the calm of the other half.

By the way, why the presence of the ram? I can tell that it is going to be reeeally important. Can you guess why? The solution in the interactive image below.

Every detailed is perfectly chiseled and Lorenzo showed all his amazing skills. Look for example the decorations on Abraham’s cloth, but also the hair and the ram’s fur, they are absolutely defined and they gave the idea of perfect volumes and shades.

Volumes that fill the entire space and the figures are perfectly integrated in it and sculptured based on classical style. Classical style that is one of the foundations for the Renaissance and Lorenzo shows his ability on using it with a “modern” touch.

For all these reasons, this work of art can be considered one of the first Renaissance masterpieces, but at the same time a connection with the Gothic style. The scene, in fact, is beautiful, I would say almost perfect for the execution. But probably it lacks on drama. Lorenzo seems to be stuck on the Gothic difficulties on showing emotions.

However, we need to remember that the Renaissance was just starting and Lorenzo was only 21 and with an enormous responsibility. Even with all that pressure he was able to make a successful and immortal work of art able to influence other amazing artists!

The angel is very important in the scene. Not only to fill the space in the upper right lobe, but in particular because he is stopping Abraham from killing his son

The ram. Apparently outside the main scene, it is actually very important because it will be sacrificed instead of Isaac

The main scene depicts Abraham while he is going to kill his son whit a knife because God asked him to do it to prove his faith. We can read the tension of the moment and Ghiberti has been amazing on sculpting it.

However, the scene seems to lack a bit of drama. In particular compared to other Renaissance works of art that we know, but remember that Ghiberti was just 21 and we are still really close to Gothic style. So this is actually a big step ahead

The 2 servants with the donkey are in contrast with the tension of the right half of the scene. They are completely unaware of what it's going on and their "relaxation" pushes our attention to the main scene

Please spend few seconds to watch the details on Abraham's cloth and hair (as well as Isaac and ram's fur) because they are the evidence of Ghiberti's skills.

Discover more about the Sacrifice of Isaac with many graphic effects!