Hi everyone and welcome back to Exploring Art, this is Alessandro. This mask is present in almost every art history book. The reason is that it’s important obviously, but why? 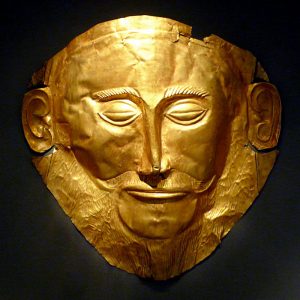 Because the Mask of Agamemnon is a gold funeral mask discovered at the ancient Greek site of Mycenae.

Mycenae is one of the three primary Ancient Aegean cultures that comes during the bronze age before the Ancient Greeks.

In the second millennium BC, Mycenae was one of the major centers of Greek civilization, a military stronghold which dominated much of southern Greece. So its influence was really strong even if actually it was just a citadel with a lower town and a population of 30,000 at its peak in 1350 BC.

However, we need to remember that it was many centuries ago when the cities were not big like nowadays. So any finding related to them is and was a big deal.

In 1876 the German business man and amateur archaeologist Heinrich Schliemann discovered the artifact believing that he had found the body of the Mycenaean king Agamemnon , leader of the Achaeans in Homer’s epic of the Trojan War, the Iliad.

Actually, modern archaeological research suggests that the mask dates to about 1600 BC, predating the period of the legendary Trojan War by about 400 years.
Schliemann was not the greatest archaeologist, but for sure he was a smart business man so he started to advertise his finding saying he found the real Mask of Agamemnon. That didn’t help his reputation since he was accused of fraud by many experts.

After many years, the mask was proved to be genuine and for us it’s a very important way to know more about Mycenaean culture because, with the mask, have been discovered many other artifacts.

We still don’t know who was buried in that site. Actually, there were many bodies surrounded by precious objects and weapons and few of them were wearing other gold masks even if not so well carved. The quantities of gold and carefully worked artifacts indicate honor, wealth and status.

In this mask in particular we can see that next to the ears there are small holes for a string used to keep the mask on the face.

It was created from a single thick gold sheet, heated and hammered against a wooden background with the details finished with a sharp tool. And it’s very well made considering the age. Nose and mouth are chiseled to give a three-dimensional volume while the other masks are usually flat and we can also appreciate the decorations to fake the beard.

It’s a sort of photograph of how Mycenaeans look like: a narrow nose and lips and almond shaped eyes. In front of it we can feel calm and peaceful like we are looking to a real person sleeping more than a funeral mask.

I hope you enjoyed this post and in the next episode we’ll learn more about a Baroque masterpiece, so stay updated and check my Youtube channel. Ciao!