Who are they? Read more to find it out 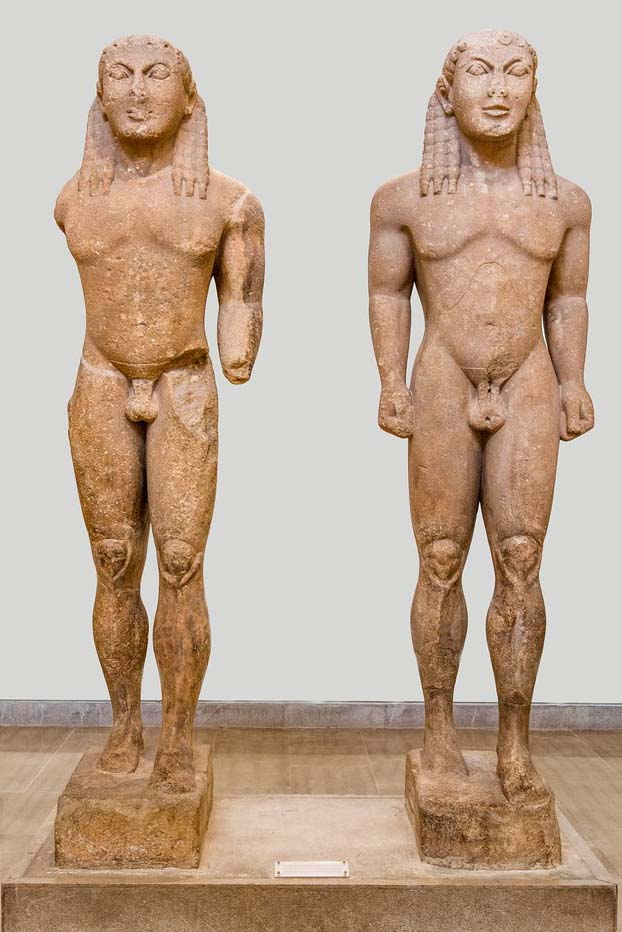 Hi and welcome back to our journey in the Archaic Greek Art!

What we have here it is one of the first examples of Archaic sculptures that is going to give us many interesting elements to think about.

Actually I should say “they” since it is clear we have two statues indentified by many scholars as the two brothers Kleobis (or Cleobis) and Biton engraved by Polymedes of Argos. Before seeing who they are, let me give you some important info like a pro 😉

The marble sculptures are dated back to about 580 BC and they are a perfect example of Kouros statues. It is not a bad word, but a style that represents free-standing nude male youths.

By the way remember that you can click on the blue words to link to the glossary and learn more about the meaning!

And it is exactly what we have here: two young males standing naked with arms locked to their sides and one leg stepping forward. Probably you are thinking that there is something “weird” in them… they look different from the “classical” Greek statues… less elegant, more “tough” and similar to an ancient Egyptian statue…

You are correct. The Kouros were designed to be admired from a frontal view. They have a votive function and the style is clearly a heritage of the Egyptian sculptures. We need to remember that art is an evolution and for sure Greeks were influenced by other Mediterranean populations. And here we are looking at the first steps of a beautiful artistic evolution.

What other detail reminds you the ancient Egyptian statues? Can you find it in the picture below?

But who are these two “tough” brothers? Well how sometimes it happens in art, we are stuck on a first interpretation gave in the 1895 by the archeologist Théophile Homolle (in charge of the team that discovered the statues). He identified the statues as the brothers Kleobis and Biton from Argos.

The story/myth of the siblings can first be seen in Herodotus “Histories”. We read that they were sons of a priestess at the temple of Hera, named Cydippe, who was supposed to go to an important festival for the goddess to be held in town. When their mother’s oxen could not be found, the brothers yoked themselves to their mother’s cart and drove her the six miles to the temple. Having arrived at the festival on time, the mother prayed for Hera to bestow a gift upon her sons. Hera listened and rewarded the sons with an eternal sleep to keep their strength and beauty immortal.

To honor the two brothers, the people of Argos dedicated statues of them to the temple of Apollo at Delphi.

Actually inscriptions on the base of the statues identify them as “princes“, an attribute usually given to other two brothers from Argos: Castor and Pollux, known also as the Dioscuri. Homolle himself, already in the 1900, tried to support this theory rectifying his own first interpretation. But it was too late.

The discussion is still opened, but what it is important for us is the strength of the myth that is represented in these statues.

Read the Work of Art

They are in fact massive and muscular and the arms bent at the elbows, touching the thighs, and hands closed in fists, amplify the idea of youth power. The static posture is broken just by the left foot stepping forward. However, it is not in a natural movement since the muscles are not really tensed. Even if on the naked bodies we can see the first attempts to research realism, we are still far from a natural posture. The statues look still more like gods than humans. The faces with large almond-shaped eyes, high eyebrows and the typical Archaic smile do not help to humanize the figures.

However, we have some important elements that are going to be foundations of the statuary art. In particular, research of symmetry and proportions and the use of the nude.

One of the reasons why these statues look “weird” is because the proportions are not “correct”. Arms and torso are unnaturally short compared to the legs and the heads are clearly too big. However, there are attempts to make the figures symmetric and the nude should magnify that. The nude in fact is another important element of the Greek sculptures that is going to influence Art for many centuries. In particular what we call heroic nudity.

Please leave your comments and remember to check my social medias 🙂

The faces are more similar to ancient Egyptian statues than "classical Greek". In particular for a specific detail:

the hair style. Congrats you found the answer to the quiz!

The two brothers are really muscular with their wide shoulders and big biceps. The arms are bent at the elbows touching the thighs and hands closed in fists to amplify the idea of youth power

The static posture is broken by the left foot stepping forward, but not in a natural way. The statues in fact are too straight and the muscles are not in tension making the posture less realistic

Learn more about Kleobis and Biton!