It's time for Greek Temple!

I know you were waiting for this moment. Today we will finally learn more about the Temple of Neptune, a beautiful example of Greek Archaic Art 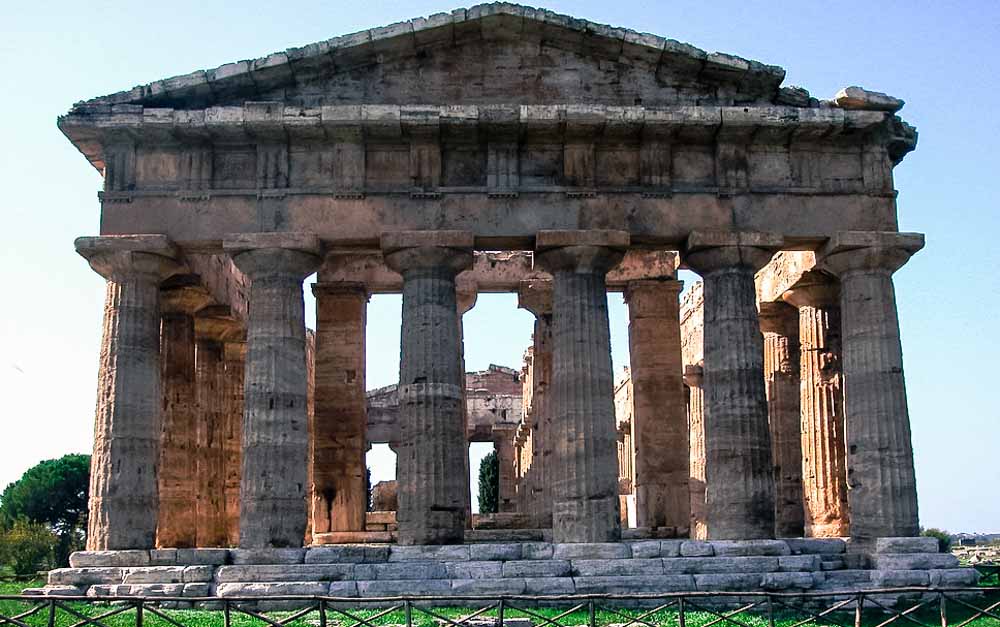 After have seen examples of painting/pottery art and sculpture in the Ancient Greek Archaic stage, today we are going to discover more about the beautiful temples that made the ancient Greeks so famous revealing their secrets!

I will go deeper in the architecture styles and evolutions in one of the next posts (so do not get scared if you feel that you miss anything 😉 ). For the moment I want to use an example to learn more about the general elements that were the foundations of the Archaic architecture. To do that we are going to look at the Temple of Neptune or Hera II.

The Temple was built in the Doric order around 460–450 BC in Paestum, Italy. Now, if you have read the introductory post about Ancient Greek Art (here the post link if you have not done it yet, but you broke my heart… 😉 ) probably you remember that I said that the Archaic stage goes up to 500 BC… But I said also that the dates are mostly a general indication to organize better the phases and Art cannot be “squeezed” into specific years. This is even more evident in architecture since it is the visual art that requires more and more empirical experience and it is consequence of decades (or centuries) of evolution.

Plus, here we are not in Greece, but in what was called Magna Graecia: colonies all around Southern Italy. Because of the physical distance, new styles and innovations were taking some years to reach and get “assimilated”.

It is a classical peripteros: a temple surrounded by a portico with columns on all four sides of the naos (cella in Roman). The naos was typically a simple, windowless, rectangular room with a door or open entrance at the front behind a colonnaded portico façade. Beside its simplicity, the naos is the heart of the temple: the inner chamber usually containing a cult image or statue representing the particular deity venerated in the temple. Because of that, it was also the room containing the offers: usually real treasures.

From the plan we can read the Temple of Neptune’s structure.

There are 6 columns on the front (and back of course) and 14 on the sides surrounding the naos.

The columns are Doric order, the most archaic one. But even if they are massive, the building is perfectly balanced and does not look too “heavy”.

Like I said in the other posts, proportions are the key in Greek Art: every measure and dimension was following strict math and philosophic rules balancing structural needs with beauty. That is why even what seems “flat and straight” like the lines of the temples, actually is not…

The Greek architecture is a “post and lintel” form: upright beams (posts) supporting horizontal beams (lintels). Aware of that the architects adjusted the plans so that the major lines of any significant building are rarely straight.

The most “evident” example is the columns: they narrow from base to top. However, the narrowing is not regular, but gently curved so that each columns appears to have a slight swelling, called entasis, below the middle.

Furthermore, the columns at the corners are not vertical but are inclined towards the centre for a couple of inches. The reason is that the architects once again were aware that the columns, viewed against the background, look different from those adjacent viewed against a shadowed wall… and they wanted to “correct” this optical effect.

Still to reach the best proportions, avoiding optical mistakes, the stylobate (floor) is slightly concave in the middle of each side. We are talking about just a couple of inches, but enough to reach this amazing balance!

One last surprise: the Temple of Neptune (as well the other Greek temples) was colored! What we see now it is just the marble that was completely covered by a white paint and lively colored decorations (red and blue in particular). Even the tympanum was painted and probably filled with tinted statues.

I want to leave you with a little quiz about another important detail that is not common to find in the other Greek temples. Can you see it in the picture below?

We are going to discover more about the Greek temples in the future posts, but I hope you enjoyed this first one and the amazing skills of the ancient architects!

Here we are in the lateral colonnade, on the right there is the naos (or cella in Roman): the "heart" of the temple where the treasure and statue of Hera was venerated

The presence of a double colonnade inside the naos is unusual, in particular that combination of a second row of smaller columns on top of the main one.

You got the answer 🙂

The Greek columns have a slight swelling, called entasis, below the middle to make the columns more elegant

Another unusual feature of this temple: the columns have 24 flutes instead of the common 20. That makes the columns "slenderer"

Watch the graphics effect to learn more about the Temple