Hi everyone and welcome back to Exploring Art, this is Alessandro. Today I want to talk about a very ancient Greek architecture that we can visit in Berlin. Before explaining how that’s possible, since this is an original building and also pretty big, I want to emphasize that the altar of Pergamon is one of the most important examples of Greek Hellenistic art. (click here if you missed the introduction)

To do it, we are going to take some sections of it and read the beautiful story it tells.

The altar, and, in particular, the friezes on it in fact are like a book that inspired the whole art history. But let’s start from the beginning so we can put the pieces all together. 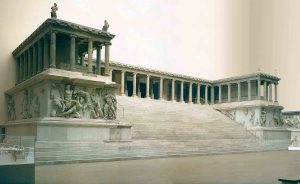 The Pergamon Altar is a monumental construction built during the reign of king Eumenes II in the first half of the 2nd century BC in the ancient Greek city of Pergamon in Turkey. Yes, I know that I said “Greek city” in Turkey. Don’t hate me, the fault is of another Alessandro, well the great one.

Alexander the Great was the king of the ancient Greek kingdom of Macedon and, during his life, he conquered miles and miles of territories stretching from the eastern Mediterranean to Central Asia. Turkey was part of the Empire and considered a Greek territory as well.

When Alexander died, in 323 BC, the Hellenistic period started lasting until 31 BC with the emergence of the Roman Empire.

However, his huge empire was too big so it was divided among his 4 generals. Pergamon became the capital of one those new reigns and one of the major cultural centers of the Greek world.

The origins of the altar are still a mystery. There are many theories, but it seems that it was built to celebrate a war victory around 166 and 156 BC. So, we are talking about more than 2,000 years ago.

By the way, if you struggle with BC and AD, check the video where I explain them: here the link.

It was located on one of the main terraces of the acropolis and we probably cannot imagine the surprise when in 1878, the German engineer Carl Humann started official excavations on the acropolis of Pergamon finding this extraordinary construction.

An altar in pieces

The excavation lasted 8 years and the main issue was that the friezes were in thousands of pieces. So Humann was shipping them to Berlin where an Italian team of restores started to put the fragments together.

Once completed, the altar was 35.64 meters (116 feet) wide and 33.4 meters (109 feet) deep; the front stairway alone is almost 20 meters (65 feet) wide. And the lower frieze all around it was put together, in all the fragments they found, after years. So, it was a huge work and now it probably makes more sense why they didn’t want to ship it back.

Beside the joke, the effort was really big since there was no documentation and the discovery was so important that, in order to display the result and create a context for it, a new museum was erected in 1901 in Berlin.

The museum, however, proved to be inadequate and it got demolished in 1909 and replaced with a much larger museum, which opened in 1930 and it was called the Pergamon Museum.

The oringal altar floor plan was almost a perfect square. The base was 35.64 meters wide and 33.4 meters long and included five steps surrounding the entire structure. The result was impressive: on the top of the wide staircase a beautiful and elegant colonnade surrounded the whole perimeter leaving just an open space in the middle for the actual fire altar. In the front and back of the colonnade took place many statues while in the center there was a frieze with the stories of Telephus a Greek hero.

Now this frieze is preserved in the chamber at the top of the altar since, for unknown reasons, the museum curators decided to change the floor plan with what we can see here. It seems they wanted to create a similar structure of the British Museum, however there isn’t a clear explanation of the choice. The consequence is that the altar is cut: we can see the front, but, on the top, the original open space is now closed into a small room where we can see the Telephus frieze.

However, from the front, the structure is still majestic and the most eye-catching feature is undoubtedly the frieze. A massive 113 meters (370 feet) long and 2.3 meters (7.5 feet) high marble high-relief that wraps around the building’s entire exterior and depicts the mythological battle between the Gods of Mount Olympus and Giants.
It is an important theme in Greek culture and mythology with the Giants that are challenging the Gods for the supremacy of the cosmos. The gods are depicted in the frieze in accordance with their divine nature and mythical attributes. Like that they were easily recognizable from the whole population. Now, as in ancient times, there are inscriptions with the gods’ and giants’ names, but we can imagine just a small part of the population could read.

Like I said before, we can read the altar like a book, from left to right starting from the eastern side. And it’s impressive to look at these over-life-sized figures above our heads twisting into near-impossible positions in the midst of battle and, being made in high-relief, they seem to take a real volume almost jumping out the altar walls.

Ancient viewers would have first approached the Altar from its rear admiring the first scene. Actually, it is the last one chronologically, so we can call it a spoiler: since we can see the god Zeus and goddess Athena decisively defeat their giant antagonists.

This version of the gigantomachy is characteristic of the Hellenistic style. It is highly dramatic, both in terms of exaggerated dynamism and torsions of the figures’ bodies and the pathos visible on their faces.

If we stop a moment on this scene, we can see what I mean. Athena grasps the giant Alkyoneos by his hair, pulling his face. His right arm grasps in vain at Athena’s forearm trying to get himself free, but Athena’s serpent is holding his whole body and that give us the opportunity to admire the sculptor’s skills. The body in fact is perfectly defined, proportioned and we can read his natural struggle on every muscle and on the face.

If the main external frieze is so full of drama and battles. The internal one, that narrates in chronological order the life of Telephus, is slightly different. Since there was only a limited amount of space available in the upper, internal courtyard where the actual fire altar was located, the Telephus frieze was sculpted on slabs that were shallower than the Gigantomachy frieze. Its dimensions were also more modest with a height of 1.58 meters (5.1 feet). As you can see, the scenes are more static, less violent for sure and the height of the relief is coherent with that.

However, the quality was still excellent and the spatial arrangements suggest the frieze to have been made in Late Hellenistic and Roman times.

But who was the sculptor? As you can imagine, considering the size of the Gigantomachy frieze, there was not just one. Scholars can say that analyzing some details, like the hairstyle and the footwear of the goddesses since they always differ. However, it is remarkable that these differences are almost irrelevant when the work is viewed in its entirety. That was possible because at least the basic design of the frieze was the work of a single artist.

Unfortunately, we don’t know his identity, but we can continue to admire the result of his, and theirs, creation. Thanks for watching and don’t miss the next video because we’ll read a famous painting.

🎬 in this new video we are going to understand

🎬 Don't miss the new video on Friday! We are go

The Egyptians didn’t have real "books", they use

On Wednesday we are going to discover the great ma

Close Menu
We use cookies on our website to give you the most relevant experience by remembering your preferences and repeat visits. By clicking “Accept”, you consent to the use of ALL the cookies.
Do not sell my personal information.
Cookie SettingsAccept
Manage consent