Hi everyone and welcome back to Exploring Art, this is Alessandro. Today I want to talk about a painting that has been puzzling experts for centuries: The Tempest by Giorgione.

We are going to analyze the whole scene and the details, understanding why it is considered one of the most important paintings of the High Renaissance (and not only), and the reasons for the large number of interpretations. 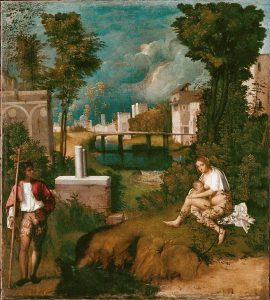 Because one of the reasons why this work of art is so enigmatic is for sure related to this great master who is considered one of the most talented Venetian artists, even if nothing is really known about his personal life and origins.

To make things even more complicated is the elusive content of his works. And the fact that only about six surviving paintings are firmly attributed to him doesn’t help either. The uncertainty surrounding his identity and meaning of his paintings has made Giorgione one of the most mysterious figures in European art.

What we know about him is, again, from Giorgio Vasari and his Lives of the Most Excellent Painters, Sculptors, and Architects and a few other documents that scholars discovered. It seems that Giorgione was born in the small town of Castelfranco Veneto, 40 km inland from Venice in 1477–78 or 1473–74. It’s not even clear when he moved to Venice. However, stylistic evidence supports the theory that he apprenticed under Giovanni Bellini: another great Renaissance artist.

Venice was one of the main European cities: wealthy, powerful and that means that there were many intellectuals and collectors interested on buying works of art. And some of them were asking for paintings that offered more than the typical religious subject matter.

And here is where Giorgione found his own space depicting a new type of subjects: the symbolism is not standard, the iconography is not either and the landscapes seem to have the same importance of the characters.

In this painting we can precisely find those features.

We are immediately struck by the woman’s gaze on the right who is clearly looking at us (and she seems not even happy about it). She is barely covered and she is suckling a baby in a very unnatural position. On the opposite side there is a young male figure, carrying a staff, who is looking at her standing in a contrapposto pose.

Who are these people? Already from 1530, so 20/25 years after the work of art was finished, the first viewers identify the male character as a “soldier” or “shepherd” or both, and the female figure as a “gypsy” or even more generically as a “woman”. The truth is that we don’t know, well except that she is a woman… that seems pretty clear. And we don’t have to take any of the theories as truth: for example, he is dressed like a contemporary Venetian, for sure not like a soldier, nor like an elegant shepherd.

To make things even more complicated we recently discovered trough x-rays that in the place of the man, Giorgione originally painted another seated nude female figure. That would change completely the meaning. So, let’s give a look to the other elements to see if we can find any clues.

Behind the characters there are trees, plants and unidentified ruins that seem to push our view on the bridge that is exactly in the middle of the scene. Unfortunately, that wood bridge is too simple and not helpful to understand the location.

In background there is a city, but, even from the architecture, art historians are not able to identify a specific town. However, barely visible on the tower there is the Lion of Saint Mark, symbol of Venice. On the entrance in front of the bridge, instead, there may be the symbol of the city of Padua.

The presence of those elements made some historians guessing the painting might represents a conflict or the opposite: an ideal moment of peace.

But then, looking carefully, we can identify another element: the stork on the rooftop on the right. Storks sometimes represent the love of parents for their children. That opens to other interpretations about the characters: they might be Adam and Eve with the son Cain or an allegory of a Greek myth or the woman could represent the fortitude, and these are just the most common.

The protagonist is the tempest

Again, we don’t know which theory is correct, what we know is that we shouldn’t forget to talk about what gives the name to the painting: the storm.

In the sky in fact is clearly visible a storm about to break. There are dark, heavy clouds cut by a lightning and, another reason why Giorgione is so appreciated, is that he has been able to create the atmosphere, the humidity that we can feel in that weather. The lightning of the painting is soft, greens and blues dominate making the other colors gloomy. We perceive the air density that Giorgione was able to simulate thanks to his incredible technique and we perceive also the silence.

Yes, because the scene depicts a moment of absolute calmness that is going to be broken soon by the storm. And the characters are not the protagonists of the scene: they are in foreground, but they are on the sides, almost in the shade, leaving a fundamental gap. The painting in fact is mostly in the space between the figures, it’s about the landscape with the deserted city and the storm in the sky.

As a consequence, the characters seem almost like a casual presence and that’s the reason why we tend to think they must be allegorical, they must have a meaning.

Like I said, we don’t know that. What we are sure about is that Giorgione created a scene able to capture our attention and emotions. It’s pure poetry and we cannot stop admiring it wondering why it is so magnetic, even if one of the reasons is for sure the woman looking directly at us.

Now you understand why Giorgione is considered a master. Unfortunately, he died in his thirties leaving just a few works of art and none of them signed. However, that’s a motivation for us to learn more about this mysterious painter. So, don’t miss the next posts and check my YouTube channel. Thanks for watching. Ciao

Why is the Vitruvian Man by Leonardo da Vinci so important?

Raffaello explained in 7 works of art