Hi everyone and welcome back to Exploring Art with Alessandro. If I say Giuseppe Arcimboldo probably you wonder who is this person and why he should be a topic for a post.

Well Arcimboldo was actually a very talented painter who, in the second half of the 1500, reached great fame and success painting some unique works of art like this one here. 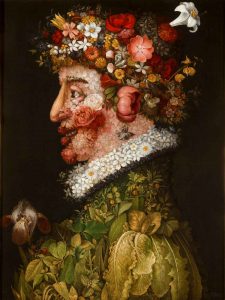 Even now it is still a bit weird, right? Imagine back then when the Renaissance heritage of Raffaello, Leonardo, Michelangelo, was still fresh.

Today I want to focus on a series of very popular paintings he made, The Four Seasons, admiring his genius and understanding why we can call him the master of illusion. We’ll see in fact how he put together fruits, vegetables, flowers and other items to create those incredible portrait heads.

First let me give you a couple of info that are going to be useful to understand better Giuseppe Arcimboldo. He was born in Milan in 1527 and, like his father, started his career as a designer for the cathedrals’ stained glass and frescoes. Unfortunately, not a lot of his early works survived.

However, he was probably very talented since in 1562 he became court portraitist to Ferdinand I at the Habsburg court in Vienna and, later, to Maximilian II and his son Rudolf II at the court in Prague. All three of them have been Holy Roman Emperors, so we are talking about some of the most influent people in Europe.

One of the first Arcimboldo’s works is Spring. It is painted in the form of a smiling young woman made entirely of flowers and bright green leaves. For the skin Giuseppe used flesh-toned and white blossoms, adding roses to suggest the flushed cheeks. A bigger pink rose is also the ear of the character while closed blossoms have been used to give the idea of the nose and eyelids.

However, look what he decided to do with the hair. Rather than shaping her hair from a set of similar shade of flowers, Arcimboldo crowns her with the very best blooms that spring can offer. The consequence is a beautiful explosion of flowers and colors that perfectly represents our idea of the season that comes after the plain and austere winter.

Even the dress is patiently designed: this time just with leaves. However, the large variety of leaves is another symbol of the spring richness. In fact let’s give a close look to see how even here Arcimboldo modelled the dress with many details. In particular the dandelion leaves for the shoulder, the little strawberries as decoration or the round orange flowers aligned to give the idea of a necklace. And, as it was fashionable in the 1500, the dress is completed with a soft ruff of white flowers.

If Spring portrays a young woman just in bloom, Summer instead depicts an idealized fertile woman. The large breast is symbol of abundance. Abundance that is visible also on the large number of ripe fruits and vegetables used to create the face. We can easily notice cherries for her smiling lips, peas for the teeth, a peach for the cheek, a pear for the chin or a cucumber used for the nose and so on even for the hair that is a perfect combination of fruits and leaves.

While many of the items depicted were common, Arcimboldo added also a couple of rare elements at that time: the eggplant and, in particular, the corn brought back from the New World. Both of them with the purpose of showing the importance of a patron who could afford such exotic vegetables.

The dress is made of woven wheat, and additional stalks sprout from her collar and sleeves to make it fancier. Even here Arcimboldo added a few interesting details. Barely visible on the collar we can read “Giuseppe Arcimboldo F”, where the “f” is for “fecit”, meaning “he has done it”. On the sleeve instead is the date of completion “1563.”

Actually, the date is really significant since Arcimboldo, who, as I said before, got really popular, was asked to make other copies of the series. As a consequence, the date is fundamental to differentiate them.

After Summer, of course, there is Autumn. And here the creativity of the painter starts to become genius. Autumn is shown in the guise of a middle-aged man and it’s immediately clear the metaphor symbolized by the change of colors, less vibrant compared to the previous paintings, that are fading in the chill of fall. The colors are for sure less brilliant; however, they are warm (how we would expect from this season) and there is still a discrete abundance of produce. His face is formed with a pear for his nose, a ripe apple for the cheek, a mushroom for his ear, while a pomegranate suggests his chin. The hair this time is made mostly from a single produce really common during the season: the grapes.

To be sure we understand that the figure represents a middle-aged man, Arcimboldo added some items to simulate the beard. One of them is the wheat: this time dulled and browned and not golden like in Summer. Even in “Autumn” I want to stop on another significant detail: the mouth. The smiling mouths and bright eyes of the women of “Spring” and “Summer” shift to a more flat, harsh mouth; another metaphor that darker times are coming and there are less reasons to be happy.

And so we reached the final step. The coldest and least lively of all seasons, Winter, that Arcimboldo depicted as onold man whose skin is rough and wrinkled and whose craggy features are sculpted out of the folds and cracks in the tree’s bark. Winter in fact is made from a single tree and its parts, while the other three paintings were made from a combination of different items.

The curving stump of a broken branch forms the nose, a break in the bark suggests the eye, another branch stump for the ear, while a mushroom creates the mouth. Mouth that here is even more closed than Autumn. But I want to stop one moment on how Arcimboldo used the rough, bare bark to suggests the idea of an old man’s skin: look in particular on the neck and cheek. The head this time is way less rich, except for some winter ivy.

However, if from the neck up the portrait symbolized the barrenness of winter, in the lower part there is promise of life. From the chest in fact an orange and a lemon sprout while a woven mat protects them. Their bright colors are also a note of hope to an otherwise almost plain composition.

So, The Four Seasons is not just a series, but a beautiful metaphor of the nature cycle as well as the life-cycle of man. Considering all the elements we discovered, it doesn’t surprise anymore that Arcimboldo got so popular and was asked to replicate his works multiple times.

We should remember also that Arcimboldo was active during that transitional artistic period that goes from 1520 to 1590 called Mannerism. A style that adopted some artistic elements from the High Renaissance and influenced other elements in the Baroque period. However, we can easily say that he was a complete outsider and that has been a reason of his success, but, at the same, of the fact that after his death he got almost forgotten until the 20th century.

During our journey we’ll know more about Arcimboldo and what he inspired, so, if you haven’t done it yet, consider subscribing to stay updated on the YouTube channel and social media for more interesting contents. Thanks for reading Arcimboldo – The Four Seasons and sse you in a few days!

Botticelli – The Birth of Venus