Hi everyone and welcome back to Exploring Art, this is Alessandro. I think all of us know this beautiful painting, The starry night, as well as his author: Vincent van Gogh. A man tormented by mental disease who, despite that, was able to revolutionize art creating something unique that today we are going to discover together.

We’ll see how he was able to create this masterpiece and we’ll do it connecting the elements of the painting to episode of his intense life. And that’s something necessary since we usually think that van Gogh was just mad and his art was a consequence of that. But the truth is a bit more complicated and fascinating and we are going to see that thanks to a little journey in his memories and, sometimes, with his own words. 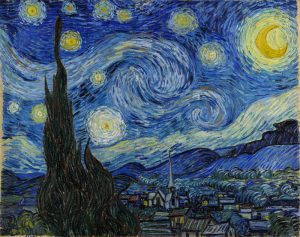 Starting with the fact that the curving, swirling lines of the painting are consequence of one of van Gogh’s experiments on finding a new style, a unique way of painting and prove his skills and the scene probably represents a combination of memories and views he had from the window of the asylum where he got hospitalized.

Yes, because it’s true that van Gogh started to suffering of depression when he was still young and that affected his all life and career. But the hospitalization happened after the end to his short-lived collaboration with the painter Paul Gauguin in Arles in 1888 and the breakdown during which he mutilated part of his own ear.

Van Gogh was ultimately hospitalized at Saint-Paul-de-Mausole. An asylum and clinic for the mentally ill near the village of Saint-Rémy in France where he was encouraged to paint. Actually, van Gogh was allowed to occupy not only a second-story bedroom, but also a ground-floor room for use as a painting studio. This is an important element in our story to understand this painting.

During his hospitalization, van Gogh was still very prolific, he was often rationally experimenting, reporting to his brother Theo the progresses on his paintings and even sending some of them to him. Of course, the two loved each other. Theo, in particular, took care even economically of the poor Vincent. However, Theo was manager of a Parisian art gallery and a gifted connoisseur of contemporary art, but even him was struggling to sell his brother’s works of art.

And it’s thanks to the letters they were writing to each other that we know the background of this great work of art.

Van Gogh had the subject of a blue night sky dotted with yellow stars in mind for many months before he painted The Starry Night in late June or early July of 1889. Precisely since spring 1888, so more than a year. However, painting at night was a challenge and it’s Vincent, in a letter to a friend to explain why: “A starry sky, for example, well – it’s a thing that I’d like to try to do,” … “but how to arrive at that unless I decide to work at home and from the imagination?”.

Van Gogh in fact was not used to invent scenes from his imagination and when he painted a first example of the full night sky in Starry Night over the Rhône, the work was completed outdoors with the help of gas lamplight.

The Magic of the night

However, living in the countryside gave an advantage that he couldn’t have in Paris: he was able to spend hours contemplating the stars without interference from gas or electric city street lights.

He wrote to his sister: “This morning I saw the countryside from my window a long time before sunrise, with nothing but the morning star, which looked very big” (777, c. 31 May – 6 June 1889).

He said also “it often seems to me that the night is even more richly colored than the day, colored with the most intense violets, blues and greens. If you look carefully, you’ll see that some stars are lemony, others have a pink, green, forget-me-not blue glow. And without laboring the point, it’s clear to paint a starry sky it’s not nearly enough to put white spots on blue-black.” (678, 14 September 1888).

That’s the challenge. Be able to paint what his eyes can see in different situations, in different nights. And the powerful desire of capturing that on a canvas pushed him to accept to use his remembrances, blending a real view with other images he had stuck in his mind and his imagination.

The result is this colorful sky. The sky in fact is not just blue, as well the stars are not just yellow. Going closer we can see an intense mix of colors in simplified forms and thick impasto.

The stars have different intensity and different glows. The most intense, of course, is the stylized Moon in the upper right and we can see how the sky blends in the mountains.

The curving, swirling brushstrokes dominate the scene. But, if we look carefully, we can surprisingly see that there are many areas where the canvas is exposed even if we have the sensation of a thick paint full of energy and dynamism. In particular in the clouds rolling through the sky.

And even the cypress undulates like fire breaking, with its dark green, the blue that dominates the scene. Cypress that in many countries symbolizes death (reason why we can often find it in cemeteries) and it seems that here it represents the death of the day and the connection between the tall sky with the earth where there is the village that is ending its day.

The cypress and the village are connected by the steeple of the church of the valley: the most visible building since the houses seem melting in the dark blue of the nigh, except for the few lights still turned on.
Village that is the only static element in the scene. It is quiet and we don’t perceive the energy and movement of the natural elements around it.

But, of course, is the sky the real protagonist, taking almost three quarters of the entire canvas. That starry night that was tormenting so much van Gogh. And there is a last sentence, that I think it’s very sweet and sad at the same time, that Vincent wrote to his brother Theo when Starry Night over the Rhône was exhibited at an important and influential venue for vanguard artists in Paris, in 1889. It says he hoped that it “might give others the idea of doing night effects better than I do.”

He couldn’t imagine that now we are here admiring his “The Starry Night” and that it became a foundational image for Expressionism and one of the most well-known paintings in the world.

As you can see, behind this work of art there is also a beautiful story: tormented, complicated, tough, but maybe, without even one of the challenges van Gogh faced, we wouldn’t have had this masterpiece. Thanks for reading, check the social media to look at more details and enjoy the video.