Hi everyone and welcome back to Exploring Art with Alessandro. I am very excited because today we can read together the Death of Socrates by Jacques-Louis David. It depicts a real tragic historical episode, but that’s not the only reason why this painting is so important. There is more and it’s hidden in all the symbols David painted and we are going to discover them as I like to do: analyzing the painting in each part to make them perfectly clear and visible.

This is going to be useful not only to read this great work of art, but also to understand many other paintings. 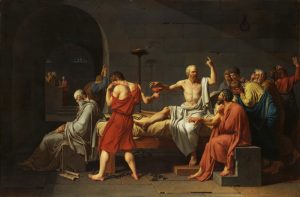 Let’s start saying that this oil on canvas is one of the best examples of Neoclassical style. A movement that started in the 18th-century, during the Age of Enlightenment, and continued into the early 19th century, inspired by the style, themes, values of the ancient Greek and Roman arts, adjusted to the “modern” taste.

In the Death of Socrates, we can find all of these elements. A classical theme painted with a modern approach in 1787, two years before the French revolution. Remember this detail because it’s going to be useful later.

As you can imagine, the painting shows the historical event of the execution of Socrates as told by Plato in his Phaedo. Socrates has been convicted of corrupting the youth of Athens introducing new spiritual things while the gods in whom the city believes were different. For that he has been sentenced to die by drinking poison hemlock. 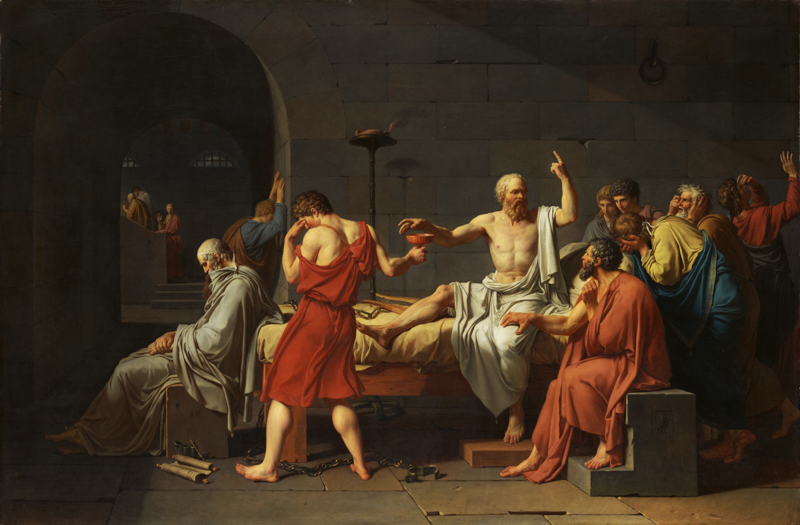 As Plato says in another dialogue, the Crito, Socrates could save himself going in exile, but he chose to stay and die to teach a final lesson to his students: that death is not to be feared by a philosopher since the soul and ideas are immortal.

David decided to paint the exact moment when Socrates, the old man in white, is grabbing the cup to drink the poison. But, as you can see, he is astonishingly calm in contrast with the tragedy of the moment that we can read on the other characters.

Before analyzing them, let’s make a step back to admire the full scene. On a first look it’s actually kind of simple, but there are reasons, so follow me. There is a flat stone wall in background, a light coming from a single source, a window on the top left, that illuminates the characters.

Characters that are fundamental because allow us to read the scene from right to left in a sort of flow of positive and negative feelings, forgetting almost totally about the background.

Starting from the right, in fact, we can see the anguish of Socrates’ followers that are showing all their pain. In contrast with the calmness and control of Socrates that flow down through the arm to his right hand that is grabbing the cup of poison. We are going back to Socrates soon because there are interesting details to focus on. But, let’s continue with the flow because the cup represents the climax of the scene: not by chance, David painted it at the center. Cup that is the connection between Socrates’ calmness and the pain of the executioner who is holding it, covering his face ashamed of his role.

And then another change, really evident, when we reach the old man sitting at the foot of the bed who seems completely relaxed, almost indifferent, to what’s going on. Don’t underestimate him because we’ll be surprised soon.

David didn’t put any name, but we can identify the characters thanks to the historical information about Socrates’ actual death.

There is just one female figure, Xanthippe (Socrates’ wife), can you see it in the interactive image below?

The man who is grabbing Socrates’ leg is Crito, his oldest and most faithful student. And, on the bench on which Crito is sitting, David signed the work of art like he wanted to manifest his connection to the man who was going to lose his master and a life-guide.

If we are sure about Xanthippe’s and Crito’s presence, it’s important to say that the Death of Socrates contains many historical inaccuracies. Even if David knew the original facts described by Plato. For example, he decreased the number of people present at the event from 15 to 12. Not only, he depicted Socrates younger than his actual age at the moment of his death. Socrates in fact was 70, but look at his face and, in particular, his body: they are both of a younger man.

However, the most significant change is probably the addition of the quiet old man at the foot of the bed. Well this is Plato. The man who made Socrates famous, publishing over 30 dialogues in which the philosopher discussed with his followers about many subjects: including body and soul, religion, science, human nature, love… Not only, Plato left a lot of documentation about Socrates, but he was a famous philosopher himself and also one of the closest Socrates’ students. So, the two were really connected and without Plato we wouldn’t know so much about Socrates.

But, probably, know you are wondering how it’s possible that Plato was his student considering that David painted him way older than his master. That’s another liberty the painter took. Not only: that day Plato was not even present at the event… So why did David add him in the scene?

Like I said before, what we know about Socrates is thanks to Plato and David added him as a sort of tribute. In fact, in the scene, Plato is not active at all, he is the only figure who is completely disengaged from the event and he seems actually sleeping and dreaming.

That’s the great solution adopted by David: he painted Plato like an old man who is remembering an important moment of his life and we are living the death of Socrates thanks to him. It’s not casual that we can read the scene also from left to right. Like a sort of projection from Plato’s memory that comes out from his mind.
And that’s why Socrates is depicted like a younger man with a muscular strong body. He is an idealized Socrates with a body that better represents his spirit: the spirit of a curious, super self-confident, proud man who is giving his last lesson about life to his followers.
And that’s perfectly visible on his face and on his body language. He is sitting relaxed while his left hand is in the same exact pose he has in Raffaello’s School of Athens. Not by chance, in both, he is in the center of the scenes (a clear reference to his role and impact on philosophy).

And if we look at the painting like a memory, other things start to make more sense. David in fact painted the scene darker and with the color more muted on the edges and it becomes brighter and more vibrant in the center. Like an important memory that is vividly stuck in our head while the sides are blurred, confused.

Plus, with this solution, David is sure that the focus is at the center of the scene where there is the cup and Socrates that is grabbing it like he doesn’t care. And the contrast of feelings we saw before is evident also in the robes. The calmness of Socrates and Plato wearing in grey/blue in contrast to the pain and sorrow of the two men in red.

Why the Death of Socrates?

So why did David pick this subject in such an historical time? Socrates was a symbol of strength over passion, of stoic commitment to an abstract ideal more important than his own life.

Like it was the desire of fighting against monarchy to reach democracy. A revolution that happened in the Ancient Greece or, few years before the painting, in the United States and it would have culminated in the French revolution just 2 years later the presentation of this work of art.

So, for David, Socrates was a fundamental symbol for the change millions of people were waiting for.

But Socrates is a victim of the democracy himself. Or, better, he was betrayed by a lack of freedom in an ancient, still not perfect, democracy. As well as the noble ideals of the French Revolution will be betrayed by the terror that follows just few years later.

And it’s a weird coincidence that David signed his name a second time in the painting on the bench where Plato is sitting, remembering. Like David identify himself with a dreamer who was idealizing a real event that was going to happen soon.

As you can see, the Death of Socrates is filled with elements that are worth to read. That’s one of the reasons why it is a well-known painting even if, often, Neoclassicism is a bit underestimated. But I think that, thanks to this analysis, you’ll enjoy more many other works of art and this journey together. Remember to subscribe if you haven’t done it yet and check my social media for more contents. Ciao!

The flat stone wall helps to focus on the main scene

This is Socrates’ wife Xanthippe who is leaving the jail in agony, waving a last sweet goodbye to her husband. Good job!

Socrates is grabbing the cup to drink the poison. However, he is perfectly calm in contrast to the pain of the executioner who is holding it, covering his face ashamed of his role.

The cup represents the climax of the scene: not by chance, David painted it at the center.

David signed the masterpiece a first time here where Crito, his oldest and most faithful student, is sitting like to manifest his connection to the man who was going to lose his master and a life-guide.

This old man apparently sleeping is Plato. He is actually dreaming/remembering and he is the heart of the scene since thanks to Plato's memories we know this important historical event. Not by chance, David signed the work of art a second time here.