Hi everyone and welcome back to Exploring Art with Alessandro. This is literally one of the most violent paintings in the whole art history even if it was made during the Baroque period. An art style which goal was to use movement, contrast, intense colors, grandeur and surprise to achieve a sense of astonishment and awe (click here to learn more).

But here it’s really a lot, Judith Beheading Holofernes is so vivid and gruesome that even today surprises for the intensity and cruelty. And another surprise is that it was made by a female painter: Artemisia Gentileschi.

Today it’s going to be a beautiful journey on reading a work of art of one of the first and greatest female painters. And you will see that, analyzing the single parts of Judith Beheading Holofernes, we’ll discover how it’s strictly related to horrible events that happen to Artemisia herself. 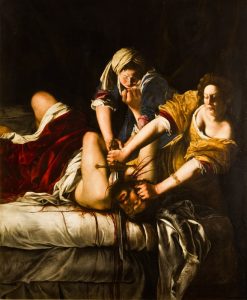 I don’t want to anticipate too much, but Artemisia is a great example of courage and persistency. In particular if we consider that she lost her mom when she was just 12 and in 1611, when she was 17, the painter Agostino Tassi, a colleague of Artemisia’s dad Orazio, raped her. With the expectation that they were going to get married in order to restore her dignity and secure her future, Artemisia started to have a sort of relationship with Tassi after the rape, but he reneged on his promise to marry Artemisia. At that point, 9 months after the tragic event, her father pressed charges against Tassi.

During the ensuing seven-month trial, Artemisia was tortured with the intention of verifying her testimony, but she continued to tell the truth and Tassi was sentenced to be exiled from Rome. Unfortunately, he never served his sentence. While Artemisia was publicly shamed.

A month after the trial, Orazio arranged for his daughter to get married with a modest artist. Shortly afterward, the couple moved to Florence and that represented a human and professional rebirth for Artemisia, who started to paint when she was just 15, but in the Tuscan city she finally had the opportunity to express herself.

Well, as we can imagine, it has not been so easy to have space in a world dominated by men and prejudice. Moreover, she couldn’t forget the injustice done to her and that had an impact also on the painting subjects and style.

It’s just few months after the trial when she made a first version of Judith Slaying Holofernes, like to channel her rage into the way she had to communicate and show her talent: painting.

Not by chance, Artemisia painted herself as Judith, the Jew heroine severing Holofernes’ head, in both versions.

The Story of Judith Beheading Holofernes

The subject takes an episode from the Old Testament which recounts the assassination of the Assyrian general Holofernes. Judith went to the encampment of the enemy army dressed in her best clothes. Struck by her beauty, the Assyrian general invited her to a banquet in his tent. After eating and drinking, Holofernes, now drunk, fell asleep on his bed, allowing Judith to seize her chance to kill him.

Artemisia depicts the moment when Judith is cutting Holofernes’ head with the help of her maidservant Abra. Judith is really determined and we can see her effort on holding the drunk general, symbol of tyranny, lying on the bed while he is trying to defend himself without succeeding.

The subject was really popular in both Renaissance and Baroque and has been painted by Mantegna, Botticelli, Giorgione and even Artemisia’s dad Orazio. However, most of them, painted the event after the beheading and we had to wait the genius of Caravaggio to see the scene depicted at the culminating moment of the murder.

As we can see, Artemisia, who painted her second version in 1620, so 20 years after Caravaggio, was clearly inspired by the great master. In particular when, after spending seven years in Florence, she went back to Rome where Caravaggio left most of his works. However, there are some differences. In particular in the way the two painters depicted Judith. With Caravaggio in fact she looks like a young, beautiful and delicate girl almost disgusted by what she is doing. While Artemisia shows a more natural scene with Judith putting her full efforts into the slaying, even by employing her maidservant.

Gentileschi differs by not holding back the gruesome imagery, but actually intensifying it adding more realism on how the blood gushes and flows and, thanks also to the expressiveness of Judith, it almost seems Artemisia put all her range into it in a sort of figurative revenge.

The realism and intensity gave her actually some trouble on the arrival of the oil on canvas in Florence and it was denied the honor of being exhibited. Plus, she struggled also to get the payment from Cosimo II de’ Medici, who commissioned the work of art, so she had to ask the help of her friend, and influent, Galileo Galilei.

Paradoxically, the great realism was the main problem. The whole scene looks almost like a modern horror movie made using just a single light source on the left. And Artemisia learnt very well from Caravaggio how to manage the chiaroscuro effect to intensify the drama, movement, emotions and theatrical approach typical of the Baroque style. Here actually we should talk about tenebrism: a very intense chiaroscuro on which the contrast between light and dark is more intense. Like that, the darkness has the same importance of the light and they become protagonists with the characters in the scene.

You can learn more about that in the Caravaggio post I published weeks ago. He has been probably the best exponent of both chiaroscuro and tenebrism so don’t miss it: click here.

Like in Caravaggio’s works, even here the darkness of the background helps to focus on the event. But, it enhances also the feelings visible on the two women’s faces that are putting all their strength and hate to accomplish their goal.

We can read that on their arms as well, tight and rigid on Holofernes’ body. Look, in particular, at Judith’s wrists: we can see the tension and torsion of her left hand pushing the head. And the right one completing the slash with the general’s heavy sword.

Sword that cuts exactly in a half the painting reinforcing the focus on the action. And Artemisia used also another trick to pull our view to the center: look at these lines. It’s really clear where we are forced to look.

However, to make the composition more natural and harmonic, Artemisia broke the straight lines with the curvature and torsions of the bodies. All of them in fact are twisting, Holofernes in agony while the two women in the effort.
Moreover, where the diagonals cross, she painted the wrist that is holding the sword. So, we don’t have choice: we can admire the whole painting, but our eyes will always fall on the slash.

Like this, we cannot miss Holofernes’ face dying and another contrast that the painter masterly created: the red dark blood soaking the white silky sheets. Blood that realistically sprinkles in front us, on Judith’s gold dress and on both of the women’s hands. A clear metaphor that they are both, together, united, responsible for the action.

And one of the blood arcs goes parallel to a very important detail that Artemisia added to this second version: the bracelet. Bracelet where she left her signature since there is a depiction of the goddess Artemis, the Goddess from whom her name comes from, but, with a weird life-coincidence, she is also the goddess of chastity who guarded her virginity carefully against those who tried to dishonor or rape her; those that threatened this met a violent end.

That’s a clear message Artemisia left. And it’s not a casualty that there are about fifty-seven works by Artemisia Gentileschi and 49 works (so 94%) feature women as protagonists or equal to men. So, we are not talking about passive models as it was common to see in many others male-made paintings. In her works of art, women were brave, active, rebellious and with strong personalities. Not by chance, she often self-portrayed in many of her works, becoming an example for many other women.

She was the first woman painter accepted to the prestigious Florentine Academy of fine arts. A fundamental recognition of her skills, but also a great occasion to have almost the same opportunities of her male colleagues. And that’s exactly what happened since she has been really appreciated by her contemporaries and her paintings reached the most important European courts.

However, history seemed almost to forget about her for three centuries. Probably because some art historians have been postulated a repressed-vengeance theory about the subjects of her paintings. Some even said she was taking advantage of her fame from the rape trial painting subjects related to her experience.

The facts are that she was not just a great painter, but also a wife and a mother of 5 children (even if just 2 survived) showing that she could compete with her male colleagues preserving her identity, dignity and using her life experience as motivation to reach awesome levels.

Not by chance, she became a symbol of feminism as a person who wanted to stand against the stereotype of female submissiveness.

I hope you enjoyed this post, please leave your comments and don’t miss the new illustrations available on Patreon and social media. Thank you for your support, ciao!