A king, a man, but also a beautiful horse! One of the most important portraits made by Anthony van Dyck: Charles I with M. de St Antoine

Let’s start to read it! 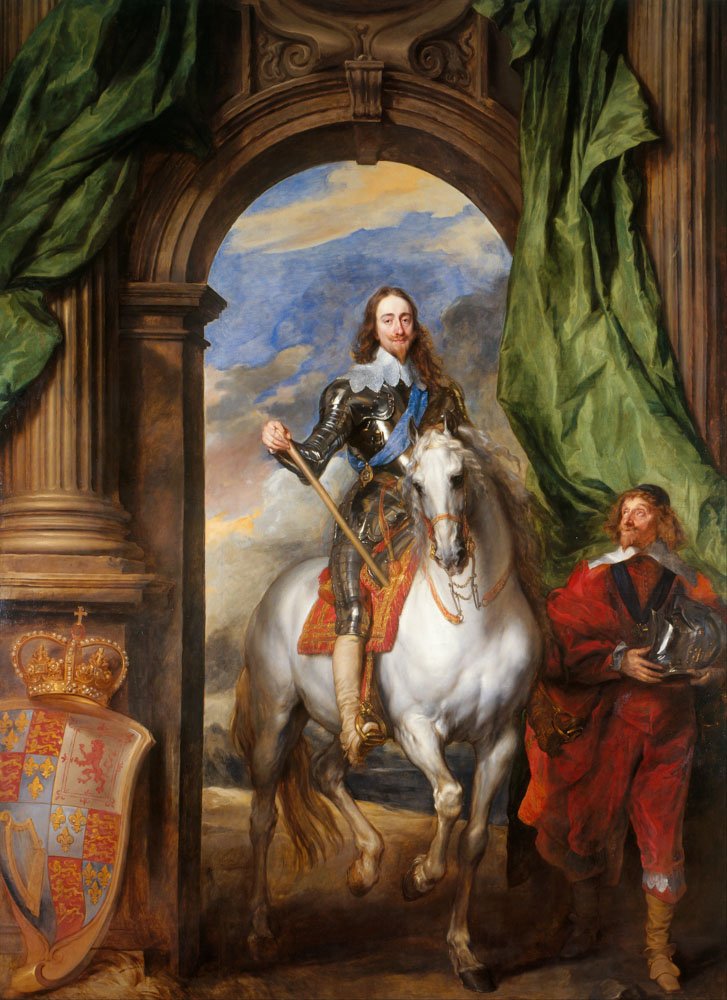 Hi and welcome back to Exploring Art with Alessandro!

Today we continue our discovery in the Baroque style with another Flemish artist: Anthony van Dyck. In the previous post we talked about the most influent Flemish painter: Peter Paul Rubens who was van Dyck’s teacher.

Anthony started to work with Rubens when he was 19 and for sure the influence of the master was immense. Anyway van Dyck, already at the age of 15, was an undeniable talented painter.

The main difference between the two was that van Dyck decided to specialize himself on portraits. That in particular for important and noble European families. And in 1632 he reached one of the top of them becoming King Charles’s “Principal Painter in Ordinary”. What we have here today is precisely the prime version of a portrait of Charles I: “Charles I with M. de St Antoine”. It is an oil painting on canvas depicting Charles I on horseback accompanied by his riding master: Pierre Antoine Bourdon, Seigneur de St Antoine.

Charles I became King of England, Scotland and Ireland in 1625 and this portrait, dated 1633, represents his role and power. Actually scholars say that Charles I was pretty short and that is why van Dyck used to depict him with a view from below. Here it was easier to do that because the King is on a tall white horse, so we can guess his ego was flying high.

But we need to be respectful 😉 even if he made such a mess in England until he was tried, convicted, and executed for high treason in January 1649 …  “His Majesty” is depicted as a chivalrous knight riding a beautiful muscular white horse under a neoclassical triumphal arch adorned with hangings of green silk.

The King of course is in the middle of the painting cladding in parade armor with the blue sash of the Order of the Garter and carries a baton to symbolize his command of the military. But what probably you are wondering is why the lack of expressivity on his face. Well it was not van Dyck’s lack of skills, but a style choice. The faces of the nobles on the portraits were suppose to be imperturbable. If we look at the only other human figure in the painting instead: Pierre Antoine Bourdon, Seigneur de St Antoine (from now on “Pierre”) is looking at his King with a mix of esteem, respect and awe because he is functional to push these feelings in the viewer.

I am sorry for Pierre, but he is a “tool” to drive a message: he is following the King “blinded” without looking where he is going because he trusts him completely. He is “below” him because Charles is more important than anyone else and he represents the feelings the crowd should have for their king.

In the painting there is also a very important French symbol! Can you see it and do you know why is it here?

Beside the meaning and message of the portrait, this painting is really useful to appreciate Anthony van Dyke’s skills: in particular the realism. The hair and mustaches of the king are painted with an amazing attention and the skin has perfect natural color gradients. At the same time, the hair of the horse moves in a natural way because of the wind and the step is making and we can read this moment also in the muscles in tension.

But what probably it is even more amazing is the details of the armor and saddle. Two materials completely different: metal and fabric, but perfectly depicted in every particular! These are all the reasons why we can consider Anthony van Dyck one of the best portraitists.

I hope you enjoyed this post, don’t forget to leave your comments and watch also the video for more details. In the next episode of the series I am going to talk about a “weird” architecture. Ciao!

Like a Roman emperor, Charles I, passes through a Neoclassical arch with a simple design so that the attention is just on the king

The background is a blue cloudy sky. There is not a precise landscape except for some moutains on the bottom

The king is depicted in a parade armor, every detail of his face and hair is perfectly painted and the realism is high. Even if the lack of expressivity on his face makes it look "distant"

The Royal coat of arms of the House of Stuart. There are four quarters: first and fourth the fleur-de-lys of France quartering the three lions of England, second the double tressured lion of Scotland, and third the harp of Ireland.

The reason of the fleur-de-lys is because the Stuart had historical connections with Britain. You found the answer 🙂

The horse is perfectly painted in every detail. In particular the head seems so real and its hair is moved by the wind and the step is making

The saddle and armor are two opposite materials and van Dyke shows all his abilities on depicting them with a high realism! The armor is almost like a mirror, really shiny and with many gold detials while the saddle is painted in every single wire suggesting to us the softness

Watch the video to leran more about this painting!