When Baroque reached Spain the result has been something that was hard to imagine like the Palace of San Telmo by Figueroa! 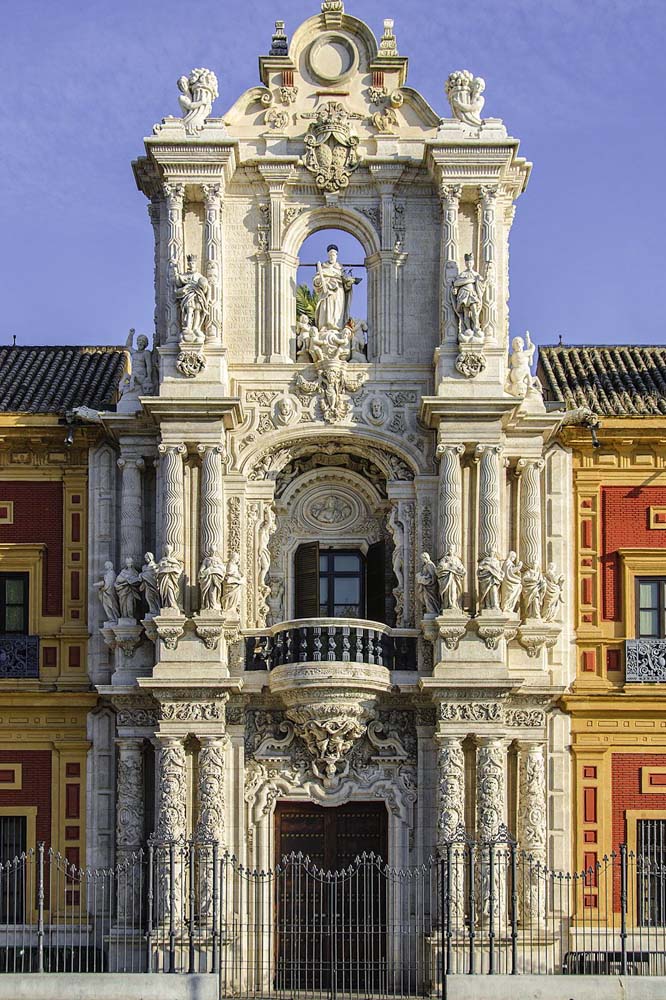 Today we are going to look at the architecture’s evolution of the Baroque style in Spain thanks to the Palace of San Telmo (Palacio de San Telmo).

By the way, if you missed my post on the Baroque in Italy, about one of the most beautiful architecture Baroque’s examples, click here. It is really useful to understand and appreciate better this path we are walking on.

Palace of San Telmo is a historical edifice in Seville, southern Spain, formerly the “University for Navigators” (Universidad de Mareantes), now is the seat of the presidency of the Andalusian Autonomous Government. It was named after St. Telmo who is the patron saint of sailors. Construction of the building began in 1682 by the well-known local architect Leonardo de Figueroa and it continued for 3 generations thanks to his son and grandson Matías and Antonio Matías. The façade, what we are going to focus on, in fact was completed just in 1754!

They wanted to be sure the result was good… 😉 jk they did a very good job thanks to the help of amazing professionals who worked also inside the Palace’s chapel: the sculptor Pedro Duque y Cornejo, stonecutter Miguel de Quintana, painter Domingo Martínez, and carpenter Juan Tomás Díaz.

The palace is one of the emblematic buildings of Sevillian Baroque architecture. The floor plan is symple: a rectangular shape with 4 towers on the corners, but inside many courtyards and gardens.

The main façade’s entrance is for sure the element that makes the Palace unique. It is an evolution of the Italian Baroque since this “modern” style arrived in Spain just at the end of the 17th Century. That period of time is called Late Baroque (1675-1750) and in Spain it was featured by an intense, really elaborate, use of sculptural architectural ornament named Churrigueresque or “Ultra Baroque“.

We can easily notice the extreme use of decorations on the entryway in all the 3 “levels”. At the ground level the door is flanked by three columns on each side completely decorated with figures and coat-of-arms. Over the door 5 Atlantes are supporting a beautiful balcony with a circular shape typical of Baroque. In this second level there are three columns on each side, less decorated, but surrounded by twelve allegorical female figures representing the nautical arts and sciences.

This unusual combination of figures continues also with the presence of two symbols of abundance. Can you find them?

At the last level there is Saint Telmo in the middle flanked by the patron saints of the city: Saint Ferdinand (Ferdinand III of Castile) and Saint Hermenegild. On this level the decorations are less intense, mostly because the attention should be on the Saints. However, we can still see how the Spanish Baroque is way richer on ornaments than the Italian Baroque. And we will see the influence of the Churrigueresque in particular in the Spanish colonies with many beautiful examples.

I hope you enjoyed this post. In the next one we are going to start a new series discovering one of the most important classical style, so stay curious!

The Cornucopias on the top are an interesting allegory that probably we wouldn't expect on a civil monument. In fact they represent the abundance and the solution to the quiz 😉 Good job!

In the middle there it the statue of San Telmo, the patron Saint of sailors since the edifice is formerly the "University for Navigators". He is flanked by Saint Ferdinand and Saint Hermenegild, both patron Saints of Seville.

On this top level the decorations are less "intense" compared to the lower 2. Like that the focus is mostly on the statues and inscriptions, but, with this solution, the entire edifice seems lighter going from the bottom to the top

The first (or ground) level is the most highly decorated with figures and coat-of-arms on each of the six columns. Even if the decorations are so evident and intense, the final result is elegant creating an unique balance.

And now we understand why it is called Ultra Baroque 😉

Learn more about the Palace of San Telmo!