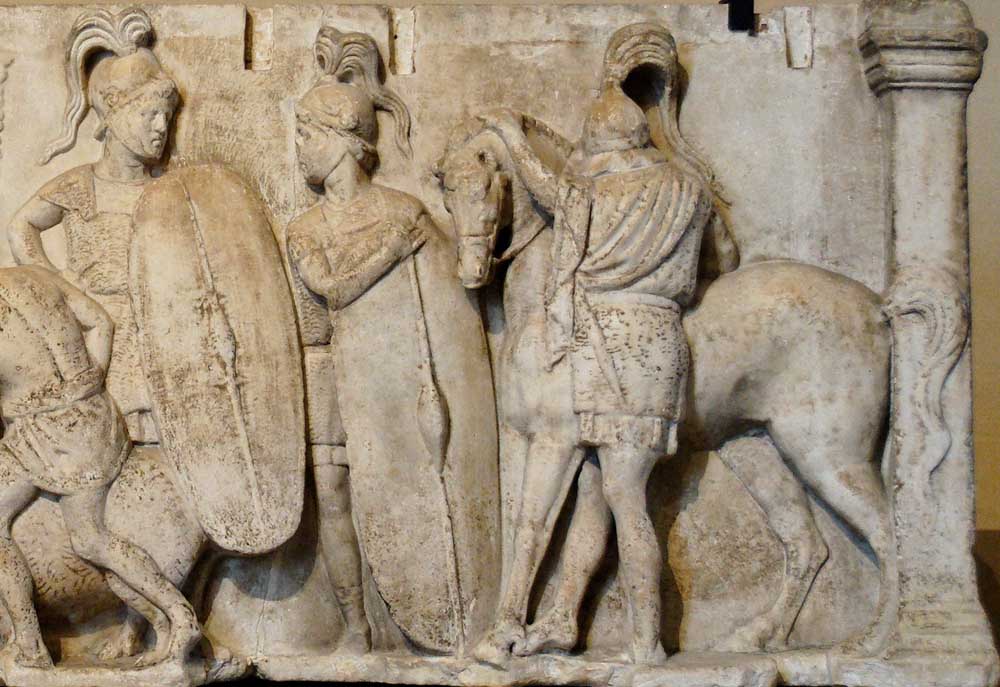 We are going deeper in the Ancient Roman Art looking at one of the oldest Roman sculpture‘s works of art. In the introductory post I anticipated how Romans really liked to use reliefs because it was a really efficient communication tool. And the Altar of Domitius Ahenobarbus is one of the best examples.

Actually we should call it Statuary group base of Domitius Ahenobarbus since it is a series of four sculpted marble plaques which probably decorated a base that supported cult statues in the cella of a Temple of Neptune located in Rome on the Field of Mars. So it was not part of an altar, but a large rectangular base (5,6 m long, 1,75 m wide, and 0,8 m high – 18.4 x 5.7 x 2.6 feet), intended to support the cult statues.

The name Domitius Ahenobarbus is from a Roman general who vowed to build a temple for the god of the sea after a naval victory.

The work of art is dated to the end of the second century BC, which makes it the second oldest Roman bas-relief currently known. Three of the four panels depict a mythological theme in a Hellenistic style: the marriage of Neptune and Amphitrite. The one I want to look at together today was added a bit later (we can tell from the difference in style, subject and material) and it depicts an important moment in the ancient Rome’s life: the Census.

The relief, which is one of the first examples of continuous narrative style, is read from left to right and it can be divided into three scenes. First the recording of the Roman citizens in the register of the censor. Second the purification of the army before an altar dedicated to Mars. Third the levy of the soldiers.

The Roman census was a period when all Roman citizens were recorded. Based on each individual’s wealth, the censor, the Roman magistrate (here the third person reading from left to right), determined who would sit in the senate and who would serve in the military, which the Romans considered an honor.

Let’s start with the first scene.

The first person on the left is an official involved in the census and he is recording the identity and the property holdings of a man standing in front of him. The statements are recorded in a codex, made up of two wooden tabulae (wax tablets). The third person is the censor and he is depicted with one hand on the shoulder of a fourth person who wears a toga. By this gesture, the censor accepts his declaration and renders his judgment, which concluded the process of assigning the individual to a class.

The second scene is religious and called “Lustratio”. It was a ceremony very common in the ancient Rome used to “purify” people, but also cities, objects or buildings. It included a procession and in some circumstances the sacrifice of a pig, a ram and a bull.

In this particular circumstance, the ceremony is used to legitimate the census and it is presided by the censor who is the figure touching Mars’ altar with his right hand. And Mars himself is represented in full armor to the left of the altar. These could seem details, but actually they are veeery important!

The presence of a God in a daily Roman life’s moment validates the importance of the ceremony and the altar represents the connection between divine power and “civil” power. An imperishable connection. Mars touches a side of the altar and on the other side there is one of the most important people in Rome: the censor. That means that his power comes directly from a God, and not a random god, but the God of war and Roman’s “father”.

For all these reasons Romans were really proud if the censor picked them as soldiers. Rome’s strength was the army and the motivation to be part of it was one of the best keys to its success.

It is not a coincidence that in the last scene on the right we see two infantrymen and a horseman with his horse. So a military scene.

Once again the meaning is deeper. First of all because the scene recalls the existence of classes in the society that reflected also in the army. The cavalry in fact was formed just from the aristocracy while the infantry was formed with the “lower level” of citizens.

Second, the two infantrymen that connect the second and third scene are the same that connect the first and second scene. That symbolizes how every civil and religious moment was still finalized to make a strong army reinforcing Rome’s strength!

In this beautiful example we found many of the elements that are foundations of the Roman culture and power. And in the next posts we will continue to explore other amazing works of art! Stay curious!

Learn more about the Altar of Domitius Ahenobarbus with many graphic effects!

Laocoon and his sons