Alexander Mosaic tells the story of a man able to become legend. However, this is not just a battle of heroes…

it is mostly a battle of men… Ancient Roman Art: Alexander Mosaic 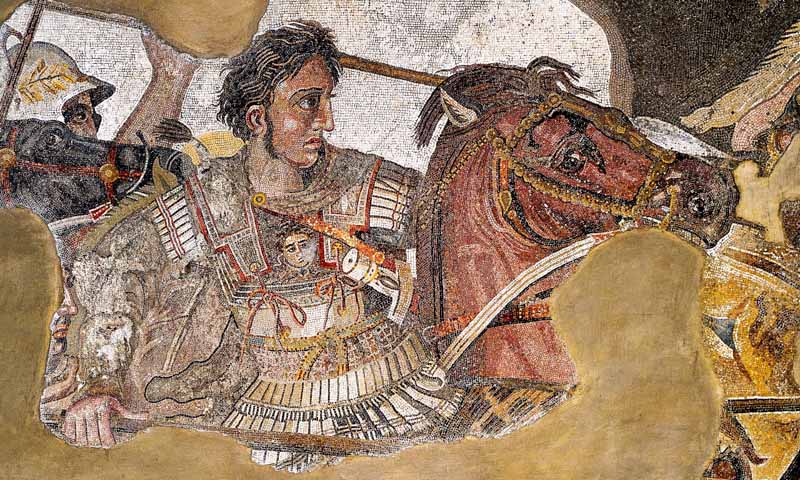 Today we are going to learn more about a real masterpiece: Alexander Mosaic. We are still in the Ancient Roman Art and in the introductory post I said how much mosaics were appreciated by Romans.

But here today we have an amazing work of art originally from a floor of the House of the Faun in Pompeii, now is preserved in the Naples National Archaeological Museum. Like we learnt in the last post, in 79 the eruption of Vesuvius buried the cities of Pompeii and Herculaneum preserving monuments and works of art for 2,000 years. And one of them is this big mosaic (2.72 x 5.13 meters – 8 ft 11 in × 16 ft 10 in) dated between 120 and 100 BC that depicts a battle between the armies of Alexander the Great and Darius III of Persia.

And the mosaic depicts the moment when the King of the Persians turns and flees under the attach of the Greek General Alexander. We can feel the tension of the battle and the confusion and clearly see that Darius is giving the order exactly now because the Persians’ spears are still facing towards the Greeks and the King is on the chariot that is being spun around. And the black horse that is part of the team leading Darius’s chariot perfectly shows this sudden change of direction with its movement.

There are many elements worth to be read in the mosaic, but one of the most interesting are the faces. Starting with the main characters, they are looking at each other. However, we can see fear and bewilderment in Darius’ look while Alexander seems to be confident and focused on his goal. His goal was to create the biggest empire known. And he almost succeeded since he put under control an enormous area of the known world.

But they are not the only two expressive faces: one of my favorite details is the Persian soldier on the ground because, if you look carefully, you can see his face reflected on his own shield. Now, first of all, it is important to say that it represents another evidence of the amazing artists’ skills! But it is remarkable also how the face shows the human side of the defeat: a man who is looking at himself, fallen and maybe about to die.

All these details have even more “importance” if we think that we are looking at a mosaic and not a paint! Even if it is believed to be a copy either of a painting by Aristides of Thebes, or of a lost late 4th-century BC fresco by the painter Philoxenus of Eretria.

The style and the scene, in fact, are typically Greek, but we know how much Romans appreciated Greek art and, because of that, we are lucky to have at least a copy of the original works of art. One reason more here to appreciate the “copy” is because almost nothing of the ancient Greek paintings survived.

Anyway, beside the original, we need to consider the amazing masterpiece we are admiring. The artists created not just a perfect battle scene, but a perfect picture of a moment full of movement, tension and feelings. And all of that with tiny colored tiles arranged in gradual curves! Oh yes, I almost forgot: that result was reached with about one and a half million tiny colored tiles each one with a slightly different gradation!

I hope you enjoyed this post and the series about Ancient Roman Art. In the next episode I am going to start a new series with more surprises and amazing works of art, so don’t forget to subscribe on my YouTube channel. Ciao! Ancient Roman Art: Alexander Mosaic

Don’t miss the graphic effects on my YouTube video!

Laocoon and his sons