Hi everyone and welcome back to Exploring Art, this is Alessandro. Today we are going to learn more about a sculpture that is considered one of the most important in art: Laocoon and his sons. 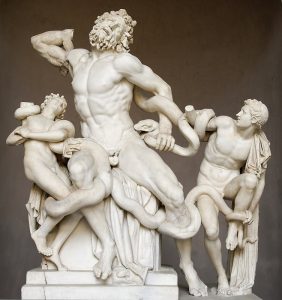 NAME Laocoön and his sons

Because of the quality, maybe you could think it’s a Renaissance sculpture, but actually it’s a really ancient masterpiece, probably a Roman marble copy from a Greek Hellenistic bronze commissioned for the home of a wealthy family between the 1 century BC and the first century AD.

By the way, if you struggle with BC and AD, you can check the post where I explain the meaning and how to use them. Check on this link.

Back to our statue: who was Laocoon and why is he involved with his sons in this tragic scene?

Let’s start with the second answer that it’s easier: for some reasons, ancient Greeks used to love tragedies and if in their stories there were not some deaths they were not happy.

And this statue depicts a clear tragic moment. We can see in fact the Trojan priest Laocoön (or Lacoon) and his sons Antiphantes and Thymbraeus being attacked by sea serpents. The story of Laocoön, a Trojan priest, came from the Greek Epic Cycle of the Trojan Wars, though it is not mentioned by Homer. It had been the subject of a tragedy, now lost, by Sophocles and was mentioned by other Greek writers.

There are many versions of the story. However, was Virgil in his Aeneid to make the episode more popular telling that Laocoön was a priest of Poseidon who attempted to expose the ruse of the Trojan Horse. So, he got in trouble with Minerva who sent 2 snakes to kill him and his sons to be sure the plan could succeed.

And the sculptor, who is unknown, depicted the exact moment when the 2 snakes are attacking the protagonists, making the scene full of dynamism and agony.

The figures are near life-size and the group is a little over 2 m (6 ft 7 in) in height. That amplifies even more the intensity of the scene since, in front of it, we can perceive the suffering and the fight.

It’s a strong contrast with the elegance of the sculpture that is made thanks to the classical pyramid structure and the diagonal line that we can draw inside a perfect square, combined to the sinuosity of the shapes.

The sinuosity in fact is evident on the sons’ bodies and even more on Laocoön. Look what happens if we draw a line starting from his head and going down to his torso and leg.

This solution was really popular during Renaissance because it gives the idea of movement. And the snakes magnify even more the movement connecting the bodies in a tragic fight on which the tension is visible on the faces and muscles.

It’s interesting noticing also that the face seems to be of a mature man while the body is of a younger one. This choice was possibly made to combine the strength and wisdom of the Trojan priest.

The quality is astonishing and we can imagine the surprise when the group was unearthed in February 1506 in a Roman vineyard. Informed of the fact, Pope Julius II, an enthusiastic classicist, sent Michelangelo to the site of the unearthing of the statue immediately after its discovery.

When the statue was discovered, Laocoön’s right arm was missing, along with part of the hand of one child and the right arm of the other, and various sections of snake. The sculpture has been fixed pretty soon. Even if, around 1540, it has been decided to change and important “detail” that remained in place until modern times (challenge yourself in the quiz below).

In 1540 an important restoration took place and it changed an important piece of the statue... can you see it comparing the recent image and the one above took in 1967? (the answer in the interactive image below)

As I said, the discovery of the Laocoön made a huge impression on Italian artists who have been strongly influenced. Michelangelo is known to have been particularly impressed by this masterpiece.

I hope you enjoyed this video, let me know what you think about it and check my website for more info and pics. See you soon!

On Lacoon's face we can read the pain, hopelessness and the last effort to make himself free and he is desperate since his sons are dying too

Look also to all the details on the beard and hair

When the statue was discovered, Laocoön's right arm was missing.

The sculpture has been fixed pretty soon even if, around 1540, it has been decided to change Laocoön's right arm with and outstretched ones which remained in place until 1967!

Minerva sent 2 sea serpents, did you notice the head of the second one under the kid's hand?

Their presence helps to make the scene more tragic, but, at the same time, the sculpture more elegant

Lacoon's face seems to be of a mature man while the body is of a younger one. This choice was possibly made to combine the strength and wisdom of the Trojan priest.