Hi everyone and welcome back to Exploring Art, this is Alessandro. Today we are going to understand why this ancient broken statue is considered a masterpiece.

On a first look in fact what we notice is that there are some important missing parts… so why is it one of the most admired sculptures in the world?

Trust me if I say that there are many good reasons and we can read them in the details that we are going to discover together. 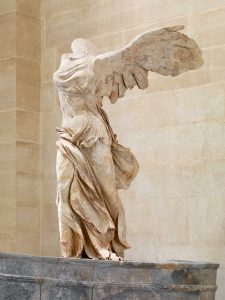 First of all, the name: Nike of Samothrace. What does “nike” mean? In Greek mythology, Nike was a goddess who personified victory in any field, including art, music and war of course. She was often depicted in Greek ancient art with wings and in the act of flying and that’s why this work of art is also called Winged Victory of Samothrace.

The Nike of Samothrace discovery

A bit of geography to understand what I am talking about: Samothrace is an island located in the northeastern Aegean Sea where the archeologist Charles Champoiseau undertook an exploration of the ruins of the sanctuary of the Great Gods from March 6 to May 7, 1863.

We cannot imagine his surprise when, in April 13, he discovered part of the bust and the body of a large female statue in white marble accompanied by numerous fragments of drapery and feathers. Yes, the sculpture was really damaged, but even from the pieces he identified her as a winged victory of, I am using his words, “colossal dimensions”.

“Colossal” is a perfect adjective since the total height of the monument is 5.57 meters (or 219 inches) including the base. The statue alone is 2.75 meters (96 inches) and the location at the top of the main staircase inside the Louvre Museum amplifies the sense of power and drama that the statue, even if damaged, communicates.

But before analyzing the Nike I want to say that she is not just big, but also very old. To be precise, she was approximately made around 190 BC, so 2200 years ago.

“By the way, if you struggle with BC, AD and with all those complicated dates, check the post where I explain the meaning and how to use them. You can find the link here and I want to thank you because it’s getting really popular and I have been receiving many nice comments and likes. Also, if you haven’t done yet, please consider subscribing and sharing the posts and videos, so you can support this free project allowing me to create more content.”

As I said, the statue was carved around 190 BC during the Hellenistic period: the Greek artistic era that starts with the death of Alexander the Great in 323 BC and ends with the conquest of the Greek world by the Romans in 31 BC. A period of time when Greek art reached the highest quality in both technique and expressiveness.

Unfortunately, just a small number of major original Hellenistic statues survived, like the great frieze of the Altar of Pergamon that was a topic of one of my last videos (click here to discover it).

Most of them in fact are Roman copies like the Laocoon that we read together in another of my posts. That makes the Nike even more important and, if we compare it with other Hellenistic sculptures, we can clearly understand the level of expressiveness and drama.

The Nike of Samothrace

What’s astonishing is that, even without arms and head, this work of art communicates extreme power and solidity. The Nike is dressed in a long tunic of very fine fabric, with a folded flap and belted under the chest. The lower body is partially covered by a thick mantle that is falling and only the force of the wind holds it on her right leg.

Right leg that is advanced, not because she is walking, but because the goddess is actually landing. She has just touched the ground with the tip of her right foot while the left is still in the air. And it’s astonishing looking at the contrast that the artist, who is unknown, was able to create between the lower part of the body, more solid, pulling downward and the upper part, with the torso twisting slightly in the opposite direction of the legs and the huge wings that are folding, that suggests an upward movement.

And this tension is clear thanks to the pose, but also thanks to the contrast of the thin fabric on the top that reveals the Nike shapes, while on the bottom the drapery is thicker and the wind models folds deeply hollowed out casting strong shadows. As a consequence, the upper part seems light, while the lower heavier and that amplifies even more the movement sensation and contrast.

We are admiring something clearly impossible in real life: a human figure with wings in the action of landing, but we don’t perceive anything unreal in it. The whole composition seems astonishingly natural and elegant.

It used to be thought that perhaps the statue stood within a fountain blowing a trumpet or offering a crown of victory. Some of them were valid theories since her arms have never been found. However, in 1950, American excavators discovered the palm of the statue’s right hand in the Victory site. The discovery gave the opportunity to understand that her arm was simply outstretched and the Nike was in an open, or slightly enclosed, sanctuary. She was probably made to honor the gods and thank them for their benefits, but, unfortunately, we don’t have any piece of evidence of her real purpose and meaning.

We know instead that the base we can admire today is part of the original monument: it has the shape of the bow of a Greek Hellenistic warship: long and narrow, it is covered at the front by a combat deck on which the statue is located. As you can see in the reconstruction, the top of the bow was crowned by a high and curved bow ornament.

The whole base was carved from gray marble veined with white, identified as that of the quarries of Lartos, in Rhodes.

The grayish color of the base is a beautiful contrast with the pinkish/white Parian marble of the statue and it’s hard for us to imagine that, actually, she was painted on vibrant colors.

However, even without the original colors and with so many missing pieces, this statue is still a masterpiece that we are very lucky to be able to admire. And, actually, I think that the beauty of the Nike is also on the fact that anyone of us can imagine how she would have looked like in a unique, personal way.

Thanks for reading, remember to check my social media and Patreon for more contents. Stay updated and see you soon!